“I have a dream of empowering 75 million people of Bangladesh through Renewable Energy Technologies”. This is how, back in 1996, Dipal C. Barua, now founder of the Bright Green Energy Foundation, decided to start expanding RE in Bangladesh and make the country the first solar nation of the world by 2020.

By then, the country faced a serious energy crisis. Only 30% of the 162 million people of Bangladesh had access to electricity. Supply was hardly reliable. Overall demand for electricity was rising by about 10 per cent annually. Infrastructure was deficient, poorly managed and could not reach many rural areas (where 75% of the population lives) due to inaccessibility and remoteness. Therefore, most of the energy needs were met by biomass for cooking and kerosene for lighting (Sea4all, 2012).

Today, the country has installed more than 4 million Solar Home Systems (SHS) in off-grid rural areas, benefiting over 25 million people and wiping kerosene for lighting off the map. At present, over 60.000 SHS are being installed per month. The country has gained the capacity and knowledge of assembling all components of SHS in its territory, with more than 100.000 green jobs. Children’s evening study time is reported to have improved, as well as the health of households members. Businesses are rising due to longer hours and more varied options of income-generation activities. And no kerosene is used for lighting. SHS has become affordable at the price of kerosene thanks to innovative financing schemes allowing for 15% down payment to install the 15w-to-85w packages system, and the remaining 85% to be paid in 12/24/36 monthly installments (Bright Green Energy Foundation, 2016). 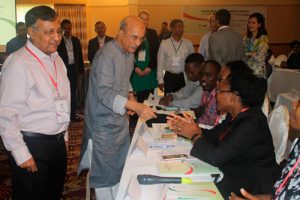 This is astonishing for Bangladesh, a low-income country in which over 40% of its population lives below the international extreme poverty line of $1.25 per person per day (UKgov, 2014). Nevertheless, Bangladesh successfully managed to grasp the nettle and make a decisive step towards RE deployment as a means to provide widespread energy access and foster socio-economic development. As the Energy Adviser (Minister) to the Prime Minister of Bangladesh, Mr. Tawfiq-e-Elahi Chowdhury highlights: “Bangladesh used its courage and imagination to break barriers and increase Renewable Energy”.

This was not a smooth journey. As Dipal C. Barua stresses out, there were many challenges, such as limited or no access to finance; lack of skilled manpower; lack of proper financial model design to make SHS affordable; lack of awareness about the clean and environment friendly energy sources; and more important, there was a lack of national energy policy. The fact that Bangladesh was blessed with over 300 days of direct sunlight made him, nonetheless, embrace solar energy as the best solution to (em)power the population of Bangladesh.

“When the Government of Bangladesh saw that Solar Home Systems overpassed the 1 million in rural areas despite the absence of a political framework, they realized how serious the renewable energy pathway was to increase electricity access”, states Barua. Indeed, in 2000, the Government of Bangladesh issued its Vision and Policy Statement to bring the entire country under electricity by the year 2020. And because of its cost-competitive nature, this goal was being implemented in rural areas almost exclusively with the use of SHS.

According to Dr. Khan, professor at North-South University in Bangladesh: “Renewable energy off grid solutions were taking care of the poorest sectors of the population because they do not have the means to live where modern services are”. In response to these developments, 2008, the Ministry of Power, Energy and Mineral Resources of Bangladesh set a renewable energy policy to create an enabling environment and legal support to encourage the use of renewables. By virtue of this policy, the Sustainable and Renewable Energy Development Authority (SREDA) was established as a focal point to support the development and promotion of RE through policies, laws, rules and regulations relating to sustainable energy and through constant multi-stakeholder consultation. For Mr. Alauddin, Joint Secretary, Power Division, Ministry of Power and Mineral Resources “If you want to bring in a new technology, you also need an institution that has the skills, capacities and mandate for this. This is why we established SREDA”. 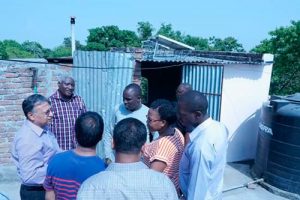 For the financing, a government-owned financial institution, the Infrastructure Development Company Limited (IDCOL), played a critical role by providing its support through grants and loans to RE private and non-profit implementing organizations. Up to this day, only in SHS, IDCOL has invested more the $600 million and the agency is calculating that another 3.5 million SHS can be installed within next few years. Further, IDCOL is supporting bio-gas based power projects, solar-mini grid projects, solar irrigation pumps, and biogas pumps to move the country faster in RE deployment and have a significant impact on national GDP.

This experience is highly valuable to many countries that find themselves in similar situations. Tanzania is one of these countries, which is why the World Future Council, together with CAN-Tanzania and Bread for the World organized a study tour to Bangladesh on April 17-23, 2016 with a group of 10 members of Parliament, government decision-makers and civil society leaders in the field of renewable energy  looking at strategies to rapidly expand first time access to electricity among its citizens with 100% RE.

“Let’s work together not to reinvent the wheel, but to see the different nature of the wheel”, as Mr. Malik, Executive Director and CEO of IDCOL highlighted when addressing the Tanzanian delegation. In Tanzania, 67.87% of the population lives below $1.25 a day.

This situation is compounded by the low level of electrification, where only 7% of rural population and 39% of urban population have access to electricity. In turn, lack of access to modern energy services exacerbates poverty due to persistent limited production opportunities and social facilities. But Tanzania, as Bangladesh, is endowed with abundant, high-quality renewable resources, which could play a significant role in meeting the county’s energy needs through off-grid solutions. 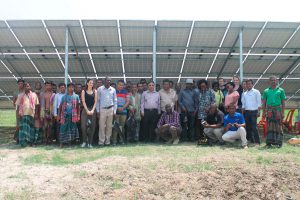 Today the African country is already ripping the socio-economic benefits of pilot projects being implemented by actors such as Tanzania Traditional Energy Development Organization (TaTEDO), and there are companies such as Mobisol which have installed more than 40.000 pre-paid SHS in Tanzania and Rwanda. But Tanzania can perform much better and at larger scale. “This study tour changed my mind about the potential of Renewable Energy as an effective tool to provide energy access to all people”, said one of the members of the Tanzania parliament after exploring the RE projects in rural off-grid areas of Faridpur, Madhukhali and Kustia, in Bangladesh.

When exchanging thoughts and experiences with Bangladeshi RE stakeholders, such as the Bangladesh Ministry of Energy, SREDA’s Chairman or the Director of Renewable Energy Limited, all participants concluded that this trip has just opened doors and is the start of a long journey of collaborations and working together. “In fact, we need to bring the experience from Bangladesh to Tanzania, especially on developing a comprehensive finance model for individual households and communities.”