Imagine you live in a house that has no access to the energy grid. It is challenging to follow any activities after the sun has set without light, you cannot charge your phone or use any device that requires electricity. The national government might have promised to enlarge the energy grid; however, this will take several years. What can be done to solve this dilemma? How can you gain access to some of the most basic functions billions of people have already access to? Solar Home Systems can be a solution. 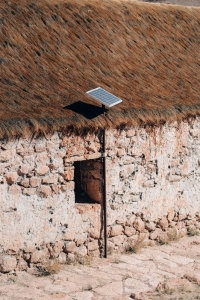 This is how they work: Solar Home Systems basically consist of solar panels which are built on the roof of one’s house. The energy gained through the solar panels then directly feeds into the electric circuit of the house. Typically, one SHS can power between three to eight devices for up to five hours per day, for instance one LED lamp, one smart phone charger and one rice cooker. The amount of energy depends on the capacity of the solar panel(s). A SHS can cost between 300 and 1000€ depending on its size, quality and the country it is sold in (Bright Green Energy Foundation, 2016 (worldfuturecouncil.org)).

In Bangladesh, SHS are already supplying over 25 million people with energy, and more than 4 million SHS have been installed since the beginning of the century (Jones and Warren, 2020). As one of the most populous countries in the world with a rapidly growing population, cramped in a comparatively small-sized country, Bangladesh has been facing increased energy poverty and lack of economic opportunities. The exceptional growth in SHS has mitigated some of these effects the country has been facing since the end of the 20th century. The energy generation of the country could not keep up with its demand. Especially rural areas were affected, because an extension of the energy grid would have been to cost-intensive for the government at the time. To satisfy most of the energy demand has led to an increase in imports, which were often cheaper than extending the grid. Therefore, considering an extension of the energy grid was not seriously considered in the past. SHSs became interesting because an extension of the energy grid could be avoided while providing the rural population with stable energy access (What Tanzania can learn from Bangladesh on energy access (worldfuturecouncil.org).

A central government agency was set into place that distributed funding – in the form of microcredits – to smaller local NGOs and enterprises, which in turn organized the installation and maintaining of the SHSs.

What made the SHSs especially successful also within the rural population was the pricing model. Normally, a SHS would cost maybe around 1000€ – a price hardly affordable by most of Bangladesh’s population – , however the local NGOs and enterprises offered an instalment-model: A down-payment of 25% to 50% had to be made, the remaining amount could be paid in monthly instalments (Bright Green Energy Foundation, 2016 (worldfuturecouncil.org). Over the years SHS became more and more popular, leading to their current success in Bangladesh and contributing to the energy access of many parts of the country’s rural population. After having paid off the instalments, the SHS is owned completely and usually supplies energy for the next 20 years, virtually without ongoing costs except maintenance. That means the owner of the SHS is independent of the national energy grid.

Why are Solar Home Systems important?

The access to energy provided by the SHS had many advantages for the rural population: It enabled local businesses to have longer opening hours which could therefore make more profit. Children were able to study longer in the evening and improve their access to education. LED lamps could be installed, therefore making the health detriment kerosine lamps become obsolete and jobs were created aplenty (What Tanzania can learn from Bangladesh on energy access (worldfuturecouncil.org)).

SHS also impact the general social infrastructures of a region. This is most evident in the creation of green jobs. The SHS have to be installed and maintained by someone, thus creating jobs at the local level within the area of renewable energy. Moreover, SHS contribute to the empowerment of both youth and women. Women are able to work in a wider range of professions both from home and within the sector of renewable energy. Generally speaking, energy is essential to development (Lessons learned from the development of 100% RE roadmaps (worldfuturecouncil.org)).

The development of SHSs should be actively pursued. In order for it to consistently grow, rural populations need financial assistance, for instance in form of micro-credits, as well as affordable prices and fair conditions for the purchase of a SHS. Workforce for installation and maintenance needs to be trained, in the best case the workforce comes from the respective communities using SHSs. Moreover, the benefits of SHSs need to be promoted to a wider population and actors across different sectors.

If you want to know more, here are some articles that might interest you:

What Tanzania can learn from Bangladesh on energy access (worldfuturecouncil.org)

Lessons learned from the development of 100% RE roadmaps (worldfuturecouncil.org)