With its judgment on 4 February 2021 against Dominic Ongwen, the International Criminal Court (ICC), based in The Hague, Netherlands, adds its third trial judgment to a series of findings that condemn crimes against children. These crimes include the use, conscription or enlisting of children in armed conflicts. Ongwen, once a child soldier himself, faced trial for 70 counts of crimes against humanity and war crimes committed during his time in the Lord’s Resistance Army (LRA) in Northern Uganda between July 2002 and December 2005.

In a trial that lasted a little over four years – the trial began on 6 December 2016 – judges heard from the Prosecution, Defence, and victim representatives, who each called witnesses to give evidence. At the end of the judges’ deliberations, Ongwen was found guilty of 61 of the 70 counts in the indictment. On 6 May 2021, Ongwen was sentenced for his crimes to 25 years in prison—one of the judges would have even sentenced him to 30 years’ imprisonment. The judgment is currently under appeal by the Defence, who can also appeal the sentence. The fact that Dominic Ongwen was himself a child soldier was a crucial element of the overall trial, including in his defence of mental incapacity and duress. These paragraphs from the sentencing judgment, deliberating whether a sentence of life imprisonment would be warranted, deserve particular mention: 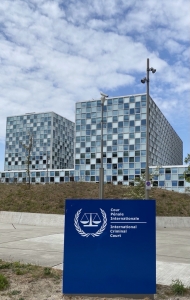 The sentence will certainly be dissected by observers, and thoroughly analysed, as acknowledged by the Presiding Judge, Judge Schmitt from Germany. During the sentencing hearing, he stated that

“Some victims may not agree with the decision not to impose life imprisonment. Dominic Ongwen and the defence may not agree with the decision to sentence him for a period of imprisonment longer than what he hoped for or thinks to deserve. Contrasting views on the adequate sentence may also be held by others that have been interested in this case, but that not always may know in full all relevant facts and all relevant evidence contained in the record of the case. This is understandable. The Judges, however, must only respond to the rules of the law and to our conscience.”

The Ongwen trial judgment is the third in a series of convictions for crimes against children that started with the first conviction by the ICC in the Lubanga case. (Two defendants in one other case, Mathieu Ngudjolo Chui and Germain Katanga, were acquitted of crimes against children because the evidence did not suffice to establish their personal responsibility for those acts).

In 2012, Thomas Lubanga Dyilo, former President of the Union des Patriotes Congolais/Forces Patriotiques pour la Libération du Congo (UPC/FPLC) of the Democratic Republic of the Congo (DRC), was found guilty of the war crimes of enlisting and conscripting of children under the age of 15 years and using them to participate actively in hostilities. His conviction was confirmed on appeal in 2014, and he was sentenced to 14 years’ imprisonment. In 2017, another trial chamber, having received 473 applications on behalf of all of the victims which may potentially be eligible for reparations, concluded that a total amount of USD 10,000,000 should be paid in collective reparations for Mr Lubanga’s liability to the 425 who were “most likely direct or indirect victims of the crimes of which Mr Lubanga was convicted”. However, the chamber also noted that, based on the evidence received, hundreds or thousands of additional victims were affected by Mr Lubanga’s crimes.

The second case resulting in an ICC conviction for crimes against children focused on the acts allegedly committed by Bosco Ntaganda, also from the DRC. In fact, Ntaganda served as Lubanga’s subordinate during the period concerned. As the Former Deputy Chief of Staff and commander of operations of the FPLC, he faced 13 counts of war crimes and 5 counts of crimes against humanity for acts which took place in 2002-2003 in the Ituri district of the DRC. An appeal against his conviction is currently ongoing, with a judgment expected soon. The reparations process is also underway.

The number of children and the terrifying despair caused to those who are forcibly recruited into armed groups and forced to commit crimes is vast – as many as 300,000 children worldwide according to reports of Reliefweb in 2017. Once part of an armed group, children often endure terrible acts of violence and forced labour other than being forced to carry weapons or participate in combat: for example, espionage, scouting, abuse as sex slaves and/or as cooks. According to the Child Soldiers World Index, only 168 out of 197 UN Member States have ratified the Optional Protocol to the Convention on the Rights of the Child on the involvement of children in armed conflict (OPAC). This provides theoretical legal protection, but the Optional Protocol cannot be directly enforced and at least 46 States still recruit children under the age of 18 into their armed forces, including the DRC. The Index also reveals that, since 2016, children have been used in at least 18 conflict situations. This shows how adequate protections are severely lacking, resulting in immense trauma and psychological damage to the affected children. The Ongwen case is a stark reminder of what happens when children soldier on – ICC Prosecutor, Fatou Bensouda, even said in her opening statement of the case that “cruel men can do kind things and kind men can be cruel”. (See also this article by Jackline Atingo, who was herself abducted by the LRA, on how the verdict against Ongwen was received by some of the surviving victims of enforced marriage).

Due to the lack of protection that could prevent the use of children in armed conflicts, for many the ICC is often a means and remedy of last resort after such crimes were already committed. This is explicitly acknowledged in the Prosecutor’s Policy on Children, which recognizes “the  importance  of  the  effective  investigation  and  prosecution  of crimes  against  or affecting  children”. As several crimes under the Court’s mandate “disproportionately affect  children,  such  as the  war  crime  of attacks on buildings dedicated to education and healthcare”, the Prosecutor and her staff will at all times consider in its activities the child’s best interests, rights and well-being. However, while the Prosecutor’s Children Policy “considers ‘children’ to be persons who have not yet attained the age of eighteen” – and so does the OPAC which prohibits the conscription into the military of children below 18 – the ICC crime of using, enlisting and conscripting child soldiers only protects child soldiers up to 15 years of age. This results in an impunity gap for ‘child soldier’ crimes committed against children aged between 15 and 18 years.

Indubitably, the interests of children are best served when they can grow up in an environment free of violence, and of war and despair – and instead, grow up with access to education, time to play, and time to develop to become the best versions of themselves. Recruitment into an armed group deprives many children of an otherwise safe and normal childhood. It is to their credit that so many find a way to move on. Therefore, it is pivotal that all States sign and ratify the Optional Protocol to the Convention on the Rights of the Child on the involvement of children in armed conflict, and – most of all – abide by its provisions. It is also crucial that current child soldiers are freed and reunited with their families. And, when all else fails, amending the ICC crimes relating to child soldiers to enhance the scope of protection should be a priority.

The International Criminal Court is the first permanent international court that adjudicates on the criminal responsibility of individuals who are accused of crimes that deeply shock the conscience of humanity: crimes against humanity, genocide, war crimes, and the crime of aggression. Its founding document, the Rome Statute, was negotiated and agreed upon in Rome in 1998, and the Court started operating in 2002. It has jurisdiction – the legal mandate to administer justice – in 123 states across the globe, if they are unwilling or unable to do so themselves.