Two women, one mission: Our Councillor Pauline Tangiora and our Youth Ambassador Kehkashan Basu are two inspirational women working to make the world a better place. As a Maori elder, Pauline has been a respected advocate for the environment and indigenous issues for decades in her native New Zealand. Kehkashan is an Indian-born, devoted youth activist living in the United Arab Emirates, frequently travelling across the world to mobilise other young people in the movement for a green future.

During our Annual General Meeting in Hamburg, the two women provided us with an insight into their lives, their work and hopes for the WFC and made one thing clear: You don’t need to become a full-time activist travelling the world to make a difference – change starts at home.

What can we do to make the world a better place?

Kehkashan: Everybody can start by practising a sustainable lifestyle in the simplest way possible, just trying to think about the environmental impacts of everyday activities. If people choose to learn more about sustainability and spread awareness, a lot of things can be done. This also means that people need to respect the rights of others and take their views and opinions seriously.

Pauline: People need to respect each other. That is the first thing we need to teach our children: To respect ourselves and those around us.  It is also important that children are respected by the adults around them. And your actions will probably depend on the environment you live in. I live in a rural area and we have to catch our water and save it. So, everybody could contribute by putting a tank up by their house to catch the rain water. When children come to my house, they don’t turn taps on just like that because they know that water is the life and power of humanity.

Tell us a little bit about what you do

Kehkashan: In 2012, I started my youth organisation called “Green Hope”, which has the objective to carry forward the legacy of sustainable development and green economy by involving the children and youth of my region and also worldwide. We conduct conferences, workshops and academies to educate young people about what they can do to get involved in the sustainable development agenda and how they can spread awareness in their communities. But we don’t just talk about it. We also run small community projects so they can learn by doing. And we spread awareness through music, art, dance and drama because we feel the message is passed on easier that way.

Pauline: Personally, I wouldn’t even call it work. I walk alongside, especially alongside young people. I enjoy hearing their thoughts and ideas – and they listen to mine. I think in such conversations, young and old people can define the problems in the world very clearly. People from my generation should remember that we don’t have all the wisdom just because we are older. We should talk with young people to learn what they want and what they think the future will bring. If we don’t do that, we lose something.

Do you think that women or men are more concerned about the environment or more sensitive towards sustainability issues?

Pauline: In our community, we work together – male and female. We don’t say men are doing things better than women. We thank everyone in our community. We need to make sure that this remains the essence of who we are. And we have had many, many international calls, even from Germany, asking: ‘What can we do, we have a problem’ and I would say: ‘You need to work together. Men and women.’

The Rights of Children commission is doing a really great job to secure the rights of children through national policies and legislation, for example to increase child participation and environmental literacy.

What are your expectations of or hopes for the WFC?

Kehkashan: The Rights of Children commission is doing a really great job to secure the rights of children through national policies and legislation, for example to increase child participation and environmental literacy. I think continuing this work and involving more young people is going to make a big difference in the world.

Pauline: The WFC has a very important role to play in the world, as it is not just working to change things but to actively make them better. And that is important, as you can’t just say “we have to change something”; you have to make things better through concrete action.

What changes have you seen over the years?

Kehkashan: When I started getting involved in sustainable development I was 8 years old. When I was 12, I started my own organisation and I think that was a huge changing point in my life because I learnt that working with others is so much more enjoyable. We can do so much more together to get our voice heard – much more than when we work alone. Our voices together have a much greater impact on society; it is a better way to spread our message.

I often meet people who think we young people cannot make a change, just because of our age! But now, I think our voices have really been heard and we have been able to convince people that the opposite is true.

Pauline: I am trying to represent the views and the concerns of the indigenous people. I am a lonely voice for them. It’s my belief that many people don’t understand the desperate needs of indigenous people worldwide. We had 500 years of colonisation in the Americas, 250 years of colonisation in Australia and 175 without sovereignty of New Zealand. So, where do we start and where do we finish? The indigenous peoples are not asking for much although they have lost their lands, rivers and forest – which is still happening today, for example in the Amazon. So while colonisation is still continuing in this day and age, where is the public in the world looking at?

But there are some positive developments. We had no fish in our river, we had nothing. Still, the local people made an agreement with the government department of conservation and since then, they have been working together to fence off our fish. Now, even visitors want to walk up there to see it.

Indigenous people still have the knowledge, still have their way of doing things. Many of us grew up with a basic understanding of the water, the sky, the storms and the sunshine. Sometimes I feel very sad that many people don’t understand that, don’t see that. We have a lot to offer. 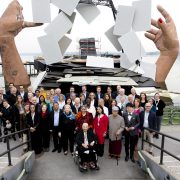 April news from the WFC!
Scroll to top