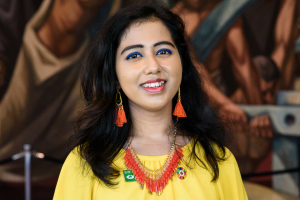 Winner of the 2016 International Children’s Peace Prize, Kehkashan Basu, born in 2000, has been impacting the global fraternity with her work on children’s rights, peace and disarmament, climate justice, gender quality and social upliftment. Spreading the message of peace, happiness and sustainability has been her passion since she was only 8 years old and she has worked tirelessly to enlist the support of children and youth across geographical boundaries. In 2013, at the age of 12, she was elected for a 2 year term as UNEP’s (United Nations Environment Programme) Global Coordinator for Children & Youth and a member of its Major Groups Facilitating Committee and she is the youngest person and the first minor, ever, to be elected into this position in the history of UNEP. She is a United Nations Human Rights Champion, a National Geographic Young Explorer, one of Canada’s Top25 Women of Influence and has been named as one of the Top100 SDG Leaders in the world in 2020.

Her internationally acclaimed work on sustainability has resulted in her appointment as a Climate Reality Mentor, a One Young World Ambassador, Honorary Advisor for the NGO Committee on Sustainable Development – New York, Global Teen Leader at We Are Family Foundation, members of World Oceans Day Global Youth Advisory Council and EarthEcho International Youth Leadership Council. She is also the youngest member of Canada’s Women in Renewable Energy forum and the Council Lead at Toronto-St.Paul’s Constituency Youth Council.

Kehkashan is the founder of global social innovation enterprise, GREEN HOPE FOUNDATION (www.greenhopefoundation.com), whose mission is to engage all sections of civil society, especially those who are marginalised, using ESD (Education for Sustainable Development) as a transformative tool to provide them with knowledge, behaviours and skills to think and act for a sustainable future. It now has over 2000 members and chapters in 16 countries. Green Hope uses an unique advocacy tool called “Environment Academy” to reach out to all age groups, incorporating innovative communication modes of Art, Music, Sport, Drama and Dance along with STEM education to spread awareness about the SDGs at a grassroots level. Till date Green Hope has conducted 200 academies in 25 countries, that have reached out to over 100,000 young people. Kehkashan’s work seeks to realise the United Nations’ vision of “Leave No One Behind” by reaching out to those who are the farthest first, which include Syrian refugees, children of prisoners in Nepal and Kenya, Rohingya refugees in Kutuapalong, the world’s largest refugee camp, HIV+ children, indigenous children and new immigrants in Canada. She is working to build resilience amongst vulnerable communities severely affected by the impacts of Covid-19, providing them with skills based education, assisting them to become entrepreneurs and creating circular economies in collaboration with local MSMEs.

Kehkashan is the author of “The Tree of Hope” which was launched at the United Nations in New York, during the 2015 UN Children’s Summit. The book tells the story of young people taking actions to mitigate climate change. Her blogs have been published by the Huffington Post, UNICEF and many other portals.

She complements her grassroots advocacy with influencing policy making at the highest levels of governance, by amplifying youth voices through her speeches and interventions. A powerful and much sought after speaker, she has spoken at over 200 United Nations and other international summits, travelling to over 40 countries.

In recognition of her work on nuclear disarmament, she was awarded the first ever Voices Youth Award in commemoration of the legacy of Mikhail Gorbachev & George Shultz. She is a L’Oréal Paris Women of Worth Honouree, Starfish Canada’s Top25 Environmentalists Under 25, the recipient of the 2020 Women Super Achiever Award, the John Muir Conservation Award for Habitat Restoration, the Straubel Leadership Award, Community Award for Youth Service in Ontario, the 2019 Innovator of the Year ( Awarded at HundrEd Innovation Summit in Helsinki on 8th Nov 2018 chosen from the world’s top 100 innovations in Education) . Kehkashan has also received international awards from UNCCD (United Nations Convention to Combat Desertification ) in 2012 , the 2012 Korea Green Foundation award, the 2013 International Young Eco-Hero award from Action for Nature, USA & the 2014 Kids are Heroes, USA award, 2014 GESS award as Ambassador for the Environment and the 2014 Solar Pioneer Award , the 2015 Non-Resident Indian of the Year Award, the 2015 & 2018 International Diana Award , the 2017 Turner Social Change Prize, the 2017 National Energy Globe Award , the 2018 Rising Star Award in Toronto on the occasion of International Women’s Day and she was one of the five Caribbean & the Americas Region Winners for the Commonwealth Youth Awards for Excellence in Development Work 2018. She has been named as one of Toronto’s most inspiring women changemakers.