„We need a citizen-oriented energy supply“

The energy transition can only succeed if energy supply is democratised. We talked to Uli Ahlke, head of the district office for climate protection and sustainability in Steinfurt (North Rhine-Westphalia, Germany), about success factors of community energy.

Citizens contribute significantly to the energy transition. Including farmers, individuals own about 42% of all renewable energy installations in Germany[2]. Unfortunately though, the German federal government does not support community energy sufficiently. At this point, local governments can make a decisive contribution to promoting community energy. The German District of Steinfurt, near the Dutch border, is setting an exemplary path. Its 24 municipalities with about 445,000 inhabitants aim to be energy self-sufficient through renewable energies by 2050 – with the greatest possible participation of the local population. Already today more than 60% of the electricity stems from renewables. We talked to Uli Ahlke, head of the district office for climate protection and sustainability, about strategies and possibilities for local authorities to support community energy, about dealing with national obstacles, and about the future of the energy transition.

The International Renewable Energy Agency (IRENA) Coalition for Action describes community energy as “the economic and operational participation and/or ownership by citizens or members of a defined community in a renewable energy project” – regardless of size and scope of the project.[1] Community energy is any combination of at least two of the following elements: Local stakeholders own more than half or all shares of a renewable energy project; voting control rests with a community-based organisation; and the majority of social and economic benefits are decentralised locally. 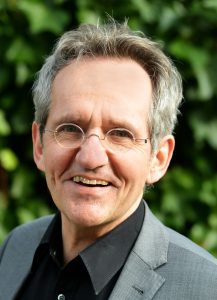 Engagement for community energy: Uli Ahlke is head of the district office for climate protection and sustainability in Steinfurt (North Rhine-Westphalia, Germany)

World Future Council: The district of Steinfurt aims to be energy self-sufficient through renewable energies by 2050. Supporting community energy is an integral part of your work. Why did you choose to support community energy to promote the expansion of renewables rather than focusing on large-scale investments?

Uli Ahlke: We have conducted several surveys in our region, and we know that the balance sheet energy self-sufficiency can only be accomplished once we operate in a regionally decentralised manner – and that it won’t work without the citizens. About 18 years ago, we experienced a very intensive expansion of wind energy with a lot of foreign investors in our region. At that time, we quickly reached acceptance limits.

We are convinced that we cannot achieve our ambitious goals without wind energy. That is why we asked ourselves what we need to do to maintain acceptance for a new expansion momentum. We needed to involve people in the planning process and to give the local community the opportunity to participate in local value creation. After all, the district of Steinfurt spends 1.5 billion euros a year on energy – for electricity, heat and mobility energy. Money we want to keep in the region.

How exactly can community energy be integrated into local climate action planning, and which participation mechanisms were particularly effective in Steinfurt?

What we do here is only possible because we have this team. We are 22 employees who take charge of the region’s sustainable development, of rural development, climate protection and education for sustainable development. Structurally, we consolidated the whole procedure last year and founded an association – the “energieland2050”. We communicate through traditional media, but are increasingly active in social media; we organise broad-scale participation proceedings; we place a strong focus on the regional advantages; and we have many amplifiers, especially on the part of the wind farmers.

As part of the wind energy expansion, we have set guidelines for all upcoming civic wind farms – in cooperation with the property owners, i.e. the farmers, with the farmers’ association, the municipal utilities and our 24 mayors. These guidelines not only guarantee the involvement of citizens, but also ensure that the first focal point for loans are local banks, and for energy marketing the municipal utilities. For the recruitment of financial resources through public participation we organised three events for one wind farm alone, attended by around 900 people. Two weeks later, we had 30 million euros, although we only needed 15.

In 2011, we set up a “Wind Energy Service Station”. There, we have a colleague, who deals with conflict management. She talks to the people and seeks solutions with them whenever there is a problem. We also launched a “Wind Energy Round Table”, where we regularly invite all stakeholders involved in wind energy to address conflicts openly and transparently. 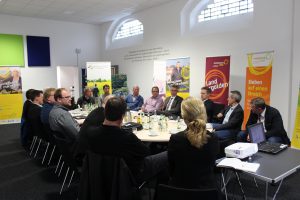 Round table discussions for solving conflicts

But wind energy is just one piece of the puzzle. Our goal is to initiate climate action in the region, involving more and more people. Many people trust us; that we practice what we preach, that we do things well, and that we act in accordance with the Agenda 21[3]. But that did not come out of the blue – it emerged over the years, during which people got to know each other, and learned to trust each other. I also believe that sustainability and regionalism are closely interlinked because we give up anonymity and work with people we know.

I agree with you. How do you deal with national legal and regulatory obstacles to citizen-owned renewable energy installations at the local level, such as the 2017 Renewable Energies Act (EEG) Amendment[4]?

I believe that the energy transition can only succeed if there is – in Hermann Scheer’s words – the “democratisation of energy supply”. The 2017 EEG Amendment, however, weakened the community energy movement. The reason for this weakening is presumably an energy policy that is geared towards corporations. But we need a policy that is citizen-oriented. The corporation-oriented policy actually prevents a successful energy transition. I am following Berlin’s energy policy with concern. If we do not change course very quickly, we will certainly miss the 2-degree target.

The approach we chose in Steinfurt is characterised by our energetic imperative “regional – decentralised – CO2-neutral”. This is supported and accompanied by the “energieland2050 network of entrepreneurs”. Only responsible companies from the region are involved in this network.

A study by the Leuphana University of Lüneburg has shown that the main obstacle to initiate community energy projects are the availability of equity capital and access to vacant space for renewable energy installations like wind turbines. How can local authorities help in these areas?

At the beginning, we conducted a study to identify our potentials for the wind energy expansion. We must not forget that our region is not particularly suitable for wind energy; we are not a coastal region and are partially suburbanised. On the basis of the potential study, we developed the guidelines for civic wind energy together with the farmers’ association, the mayors and many other stakeholders. This accelerated the expansion of wind energy. We implemented the wind energy expansion with regional stakeholders and did not rely on any external project planner or consultant. The expansion was also largely financed from the region – from its citizens, and its local banks. This is a relatively unique approach in Germany. 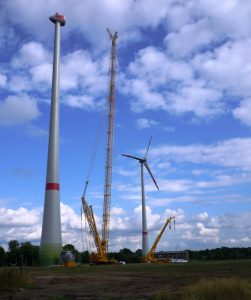 Construction of the bioenergy park Saerbeck

When we started to address wind energy with some actors in 2010 and even approached it strategically, people were very sceptical. And today I look back very relaxed and say: It worked!

I am glad to hear that. Let us now come to the last question. You have been working with passion for many years in this area. Which advice can you give to people in local governments not to lose patience and confidence in their work for renewables and citizen participation?

What you need is perseverance, patience and the faculty of abstraction. Human beings are often too impatient and cannot imagine the world changing but it is changing faster than ever. I think that in order to win people it is not enough to have good arguments, but it is important to draw a picture, a future scenario, of where you want to go and how positive the future can look like. At the end of my speeches, I often show a picture of the district of Steinfurt, which says: “District of Steinfurt – 24 health resorts”. If the energy transition succeeds, we will breathe clean air and it will be quieter. So if it succeeds, and I suppose that it does succeed at least partially, then life becomes more enjoyable and we get out of the air pollution dilemma which we are in now.

[3] Agenda 21 is a comprehensive plan of action to be taken globally, nationally and locally by organisations of the United Nations system, governments, and major groups in every area in which human beings impact on the environment. It was adopted by 172 governments at the United Nations Conference on Environment and Development (UNCED) held in Rio de Janeiro in 1992.

[4] The Renewable Energies Act (EEG), which came into force for the first time in 2000, is the central control instrument for the expansion of renewable energies in the field of electricity in Germany. The fundamental changes of the last major amendment to the EEG in 2017 relate to compulsory direct marketing and a fundamental system change from the feed-in tariff model to the tendering procedure. This model has been criticized for failing to meet the climate protection goals of the Paris Agreement and for discriminating against community energy projects.