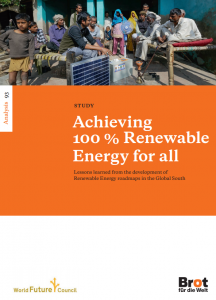 A well designed framework for 100% Renewable Energy achieves the Paris climate targets and supports implementation of Agenda 2030.  Integrated 100%RE roadmaps aiming to achieve stable energy access for everybody while eradicating poverty and decarbonise the energy system are an obligation rather than an option for countries who signed both Agenda 2030 and the Paris Agreement.  100%RE can offer opportunities to identify synergies and complementarities between energy security, socio-economic development and climate change mitigation. Country-specific, long-term roadmaps, backed by key stakeholders can provide a positive vision and thus be a tool to develop the urgently needed political leaders in post-Paris times.

This report aims to distil the lessons learned from science-based Renewable Energy roadmap development with the aim of achieving 100% RE access for all by 2050 in line with the Paris Agreement’s 1.5°C target. The report’s findings are based on the processes of projects that have been set up in Tanzania, Bangladesh and Costa Rica.

What will Planet Earth look like in 2050? According to the United Nations 2030 Agenda for Sustainable Development, the new paradigm for governments should be to “leave no one behind” and ensure economic and social prosperity within planetary boundaries. Mitigating the worst impacts of climate change will therefore require the large-scale, rapid deployment of Renewable Energy (RE) and fossil fuels to be declared an obsolete technology by 2050. This process will undoubtedly allow the manifold socio-economic benefits of RE to be unleashed, benefitting the poor, women and the young alike.

Thanks to their modularity and flexibility, renewable energies can transform an energy system into one that is decentralised and owned by the people. As RE systems would be installed where energy is needed most, we would subsequently achieve 100 % energy access, creating millions of new jobs in the sector. Specially designed capacity building programmes could also ensure a just transition for every country with a skilled labour force. The sheer number of jobs would also increase opportunities for women in the Global South to become advocates for RE, for instance as entrepreneurs. This would not only increase economic activity and improve incomes around the world, it would also mean a shift from fossil fuel to electric mobility and from traditional cooking with biomass, charcoal or wood to electric, renewable cooking. This could significantly improve the air quality in cities and reduce smoke from cooking indoors. In any case, it could reduce the number of deaths currently associated with poor air quality both in- and outdoors

Watch our Webinar-Series about the lessons-learned