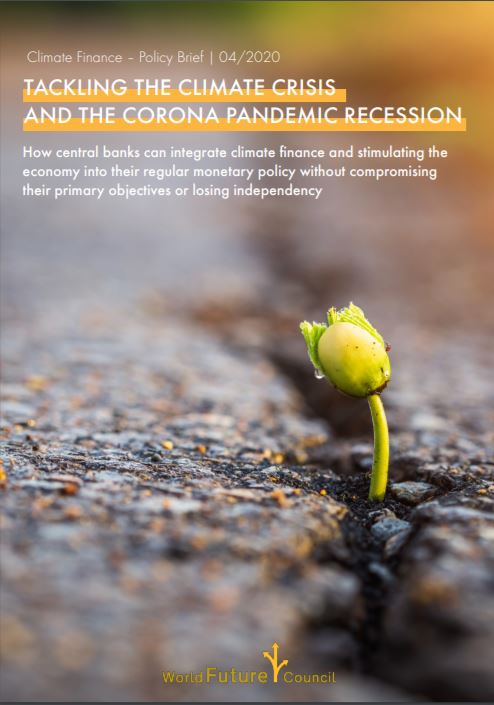 A new study by the World Future Council was released today that shows that central banks could achieve a massive reduction of global CO2 emissions whilst tackling the pandemic crisis by using new tools. This could be realised without increasing the money supply by reinvesting matured assets from previous purchase programmes.

The study “Tackling the climate crises and the corona pandemic recession” provides new tools (consisting of new Green Bonds and Guarantees) to support global climate finance and tackling climate change in this way. The tools can be integrated in the regular monetary policies of central banks without compromising their primary objectives or affecting their independence. The new tools will also enable central banks to stimulate the economy in a direct way, which is more efficient than the previous pure asset purchases and can reduce unintended spill-over effects (which are recently criticized by the German Federal Constitutional Court).

“Today, it could be regarded as mainstream among central banks that the climate crisis is part of their mandate because it will also threaten financial stability”, says author Dr. Matthias Kroll. This insight led to the establishment of the new central banks and supervisors ‘Network for Greening the Financial System’ (NGFS) in 2017.

“However, climate change is yet not reflected in their monetary policies in contrast to other systemic risk situations: For the 2008 financial crisis and the current coronavirus pandemic central banks spent and are spending trillions and multiplied their balance sheets to overcome the threat. In fact, central banks need new monetary tools, which can tackle both problems at the same time: Stimulating the economy in a direct way in the corona recession and supporting global climate finance on a scale which can stop climate change” Kroll concluded. The involvement of central banks in the field of supporting climate finance is crucial because the massive shortfall of green investments is not a lack of ‘green’ capital, but a lack of enough bankable projects. The objective of the new tools should be to make them bankable.