Hamburg, 19.05.2014 – The World Future Council mourns its founding member Prof. Dr. Hans-Peter Dürr. The nuclear physicist and philosopher passed away on May 18 at the age of 84 in Munich. 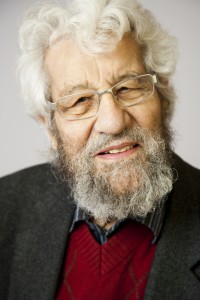 Born in Stuttgart on October 7, 1929, Dürr received his doctorate in 1956 under the supervision of Edward Teller at the University of California in Berkeley. He subsequently earned his habilitation in 1962. From 1958 to 1976, Dürr worked closely with one of the key creators of quantum mechanics, Werner Heisenberg, whom he succeeded in 1978 as managing director of the Max Planck Institute for Physics in Munich. In addition to his work in nuclear and elementary particle physics, he focused increasingly on epistemological, philosophical and social issues.

Dürr emphasized the responsibility of scientists in promoting peace, ecology and global justice and thus became an important voice of the disarmament debate of the 80s. He is the author of numerous publications and has received many awards. In his different roles, he worked with an array of national and international organizations, for example the Federation of German Scientists, the Club of Rome, the Pugwash Conference, Greenpeace and the World Future Council.

In 1987 he received the Right Livelihood Award for „…his profound critique of the strategic defence initiative (SDI) and his work to convert high technology to peaceful uses.”

Jakob von Uexkull, founder of the Right Livelihood Award and the World Future Council, praises Dürr as “a builder of bridges between worlds and worldviews.” He also said: “Hans-Peter Dürr was a scholar, who always kept in mind the social significance of science. As a concerned citizen, he wanted to put the methods of science and technology to the service of the global society and as a pioneer of the peace and ecology movement, he initiated important policy debates. Working on the frontier between science, philosophy and spirituality, he contributed to our thinking about the foundations of our being.”

You can download a high-res version of the picture here.

WFC appoints Brenda Martin as new Head of the Africa Liaison Office based in...