‘The street painting, ‘At the Nuclear Abyss’ is a graphic reminder that there are more than 15,000 nuclear weapons in the world, 1800 of them able to be launched within minutes,’ says Holger Güssefeld from the World Future Council, sponsors of the art installation. ‘The launch of any one of these by accident, miscalculation or intent could cause catastrophic destruction’

‘Most people do not realise that these nuclear weapons continue to exist – hidden away in missile silos and in submarines under the ocean’ said  artist Joe Hill from 3djoeandmax. ‘This art exposes what is hidden, and brings the public into direct interaction with this stark reality.’

The installation was part of Chain Reaction 2016, a series of nuclear disarmament actions around the world between July 8 and October 2 this year.

‘A nuclear bomb destroys through an uncontrollable chain reaction of atoms being split in two,’ says Alyn Ware, co-founder of Chain Reaction 2016.  ‘Civil society around the world is acting in a Chain Reaction of peace to highlight the immorality and insecurity of nuclear weapons, and to support nuclear disarmament initiatives of governments and the United Nations.’

The art installation was unveiled as over 1000 peace activists from around the world gathered in Berlin for the world congress of the International Peace Bureau (IPB), an organization of which 13 officials have received the Nobel Peace Prize during its history. 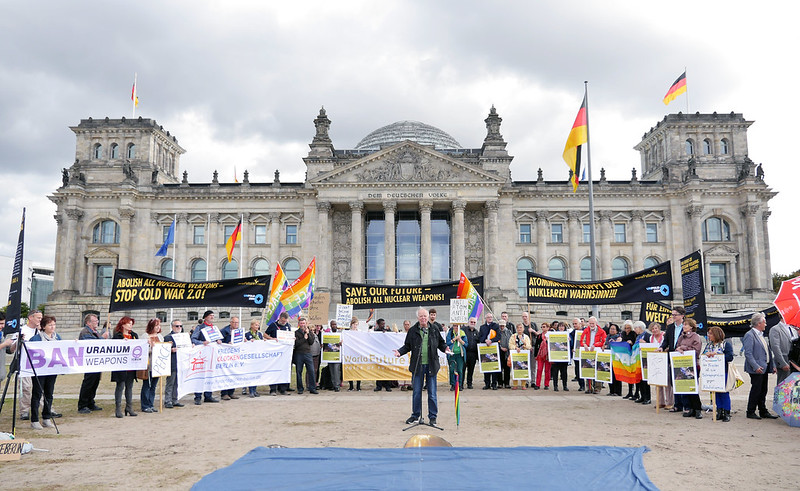 ‘The combined military budgets of the world’s governments totaled $1.7 billion in 2015,’ said Ingeborg Breines, IPB Co-President. ‘In the same year, 900 million people suffered from hunger. Every day, 10,000 children die of curable diseases. And we need financial resources to address climate change. We should not be squandering our future to feed the insatiable appetite of the military corporations.’

Chain Reaction 2016 culminated on October 2, which is Mahatma Gandhi’s birthday and which has been affirmed by the United Nations as theInternational Day for Nonviolence. ‘Nuclear weapons are the ultimate form of violence’ says Ela Gandhi, grand-daughter of Mahatma Gandhi and a Co-President of Religions for Peace. ‘Chain Reaction 2016 demonstrates the power of non-violence around the world to oppose the nuclear threat, and to build a world based on respect, cooperation, non-violent conflict resolution based on international law.’

Regenerative and Inclusive Cities: at the Habitat III in Quito

Habitat III: The upcoming UN cities summit is as important as the Paris Climate...
Scroll to top