My name is Oona. I am 23, I am French and I study politics. I joined the World Future Council in May 2019 as an intern for the Future Policy Award 2019: Empowering Youth. A few days ago, I participated in the “Fridays For Future” march in Hamburg.

From Sankt Pauli to Rathausmarkt: discovering the German way of protesting

Doing the Fridays For Future march was totally new for me, as it was the first time I participated in this strike in Germany. Before going to the protest, I had only heard about the international movement launched by Greta Thunberg in Media. I had also seen the demonstration from afar in Brussels last January, but I could not participate. So this mission was a chance for me to learn more about this movement, and to take part in it.

We met at 10 am and moved from Sankt Pauli to Rathausmarkt.

The demonstration was quite different from what I had experienced in France. In fact, the atmosphere was more relaxed and festive, and the people were more respectful and enthusiastic. No conflicts, no violence: only young people marching peacefully through the streets of the city, singing with passion: “Wir sind hier, wir sind laut, weil ihr uns die Zukunft klaut!” (“We are here, we are loud because you are stealing our future”). Among the protesters, I felt the unity and a strong will to change climate politics. It was really impressive and hopeful to be part of this crowd of young people gathered for climate justice.

“We are here, we are loud because you are stealing our future” 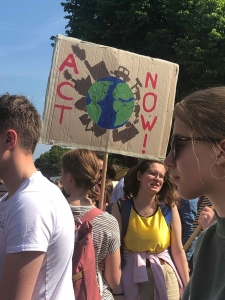 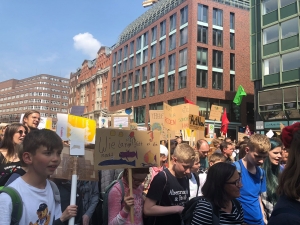 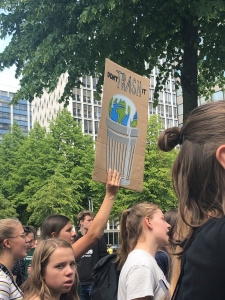 LOL Culture: from the web to the streets

In Brussels, one thing particularly struck my mind: the numerous self-made banners. It was the same in Hamburg. Among the protesters, I could see countless posters with colorful drawings, and slogans such as “Act now” and “Save the world”. There were also a lot of word games and slogans referring to pop culture and politics. The two favorite references were definitely Donald Trump and Game of Thrones – but no spoilers! 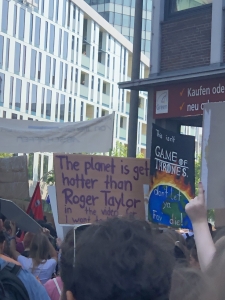 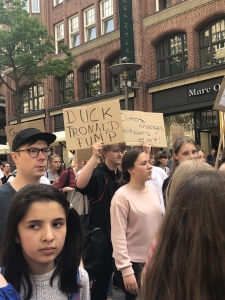 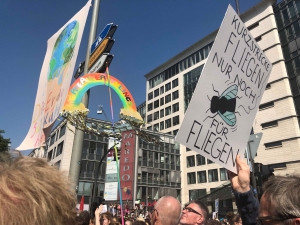 All those banners reminded me about the significance of LOL Culture for our generation. LOL means “Laughing Out Loud”. This expression was born on the web ten years ago. It has now exceeded its original meaning and has become a cultural marker for digital natives with the LOL culture. This phenomenon is a product of interactions of the youth with the media and other image contents: movies, cartoons, manga, video games, TV shows, the news… LOL Culture combines humor and protest. It expresses potash or absurd jubilation, diverting contents, or mocking the institutions and people who shape public life. But behind this irony, there is always social indignation. It clearly influences us, our way of representing the world, and our way of addressing it. That is why I was not surprised to see so many comic references to pop culture and politics in the demonstration. Holding those humoristic posters, the demonstrators wanted to denounce and raise awareness about the climate crisis. In their own way, they were calling for a sustainable future. They demanded, among other things, compliance with the Paris Agreements climate goals.

Fridays For Future: a promising movement for climate politics?

On 24th May, around 1,600 cities in more than 120 countries were on strike for the “Fridays For Future”. In Hamburg, the march reached a new participant record. We were between 17,000 and 25,000 young people and adults struggling for climate justice.

The demonstration was clearly politically-charged. In fact, the European parliamentary elections were in everyone´s minds. Many posters highlighted how important it was to vote for climate protection. For people too young to take part in the election, the march seemed to be a way to have their voices heard at the EU-level. 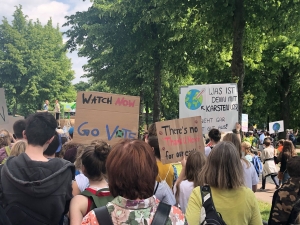 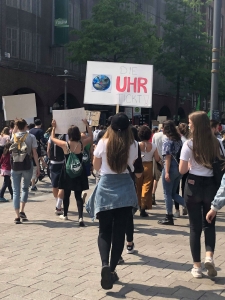 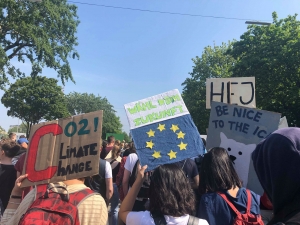 That is why I think that this march and more globally this movement prove that the critics are wrong: young people are not self-centered or politically disinterested. Rather, we are more and more aware of climate issues and engaged in climate politics. We show it in our own way, but basically, our message remains intergenerational: we call for bold actions to face the climate crisis that will impact us and the future generations.

In my opinion, this movement is necessary to really make people aware of climate emergency and to change climate politics. Our generation and the next will have to face this crisis alone if today´s adults and political leaders don´t take their responsibilities.

And now that we have proven our involvement in climate politics, the next step would be to allow us to really be involved and have our voices heard in decisions affecting our future.