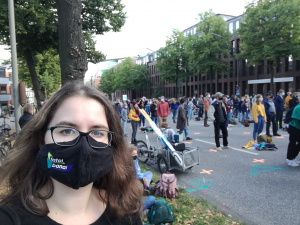 Louisa, one of our interns, has participated in the first global Fridays For Future demonstration since the Corona Pandemic and now shares with us her thoughts on the impact of Corona on the climate.

Climate in Times of Corona

For months, the Covid-19 crisis has been in the centre of public discussion around the world. Movements such as Fridays for Future had to focus on online-based advocacy, at least until the development of safe hygiene concepts for demonstrations. My previous experiences with participating in demonstrations and the images I’ve seen of the crowds of people protesting the Corona measures in Berlin certainly made me doubt that it is possible to combine climate action and social distancing. However, I am happy to say that the Fridays for Future demonstration in Hamburg on the 25th of September proved me wrong.

The concept literally started at the beginning: Instead of having everyone meet up at one single location, the areas of the city of Hamburg were divided into three zones, each with its own starting point. My march began with a nice view of the Inner Alster, where I was instructed by volunteers to walk all the way to the back in order to join the others. Entering from the side was not possible. People were divided into subgroups by other volunteers holding barrier tape to avoid clustering. We were regularly reminded to keep a distance of two meters to others at all times, and the concept made it easy to do so. The organizers announced in advance that wearing a mask would be mandatory, and I was pleasantly surprised to see that participants of all ages complied. The three sections of the demonstration met at the final location, a street of 1.5 kilometres with a stage in front and loudspeakers along the way to the back. Inside of the sections we sat down and listened to speakers and some live music before the event came to a close.

The demands of Fridays for Future were announced during the demonstration. There are three key ones: Keeping the global temperature rise below 1.5°C compared to pre-industrial levels, ensuring climate justice and equity, and listening to the best-united science currently available. The connection between the climate movement and science was also shown in the selection of the speakers. Scientists from different fields were stating their support for the demonstration and highlighting the importance of listening to sound scientific evidence.

Although the hygiene concept worked well for the approximately 6000 participants, I must admit that this Fridays for Future march was different. There was less of a crowd, which also meant fewer signs, less singing, and fewer chants resounding through the streets. Of course, I am looking forward to going back to demonstrating the way it was before- but in light of a global pandemic, I am more than glad to say that taking to the streets for climate action is still possible now and has not lost any of its importance.