8th February 2018, at the 9th World Urban Forum in Kulua Lumpur Malaysia, the World Future Council in cooperation with the Energy Foundation organized a network event to facilitate cities from One Belt and One Road Initiative (OBOR) countries to exchange experience on regenerative city – regeneration of energy, resource, urban ecosystem and urban space in urban development.

The OBOR countries occupy 40% of the world area, gathering about 70% of the world population and over 55% of them living in cities. According to UN statistics, by 2050, more than 3.39 billion people of OBOR countries will be living in cities, with 350 million people moving to cities every year. With such rapid urbanization, low carbon, sustainable, regenerative city development in OBOR countries has great influence on the implementation of the SDGs and the New Urban Agenda, said Dr. Bruno Dercon, Senior Human Settlement Officer of the UN Habitat at the opening of the event. 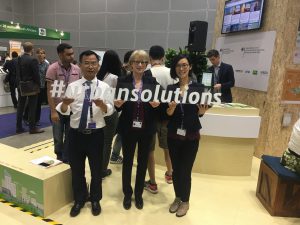 Boping Chen (right), China Director of the World Future Council, at the event

The OBOR country cities share many common challenges in their urbanization process, such as urban sprawling, natural resource exhaust, ecosystem degradation, climate change mitigation and adaption, air pollution and water pollution. A good urban planning can help cities to tackle these challenges at an early stage and avoid lock-in effect, and the experience sharing as well as cooperation between OBOR countries can not only help cities to learn from each other, to work together but also to avoid some challenges that the emerging economies already experienced.

Dr. Zhigao Wang from the Energy Foundation, presented a guideline on green smart city planning which was a summary of their eight-year experience working with China on sustainable urban planning and called for cities to adopt TOD oriented planning, limit urban boundary, promote mixed use of urban space so as to conserve energy and resource. 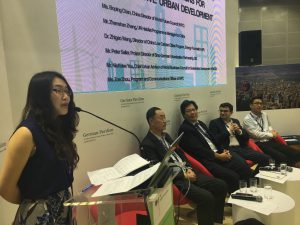 Representatives from Beijing, Kunming and Wuhan city of China, Citynet, a city network of Asia Pacific cities, the Asian Pacific Office of the United Cities and Local Government and UN Habitat joined the panel discussion, highlighting not only the sharing and learning between OBOR cities but also the spatial, financial and material flow that closely connects the OBOR cities and require cities to work together for regenerative urban development.

How to mobilise the masses: Watershed Management in Tigray
Scroll to top