Hamburg/Bonn, 12 January 2017 – Monique Barbut, Executive Secretary of the United Nations Convention on Combating Desertification (UNCCD) has signed a Memorandum of Understanding with the World Future Council in Hamburg, Germany, to establish a framework of cooperation in the fight against desertification and land degradation. This is a key element in achieving the Sustainable Development Goals. 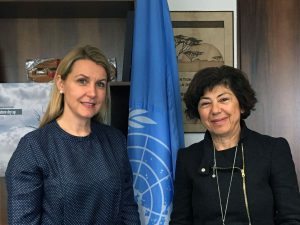 The World Future Council advises policy-makers on effective policy solutions for a sustainable future. Every year, the most visionary policies are honoured with the Future Policy Award, the only award that celebrates polices rather than people. This year, the World Future Council and the UNCCD Secretariat will identify and award policies that effectively combat desertification and land degradation.

Monique Barbut explains, “Desertification is a silent, invisible crisis that is destabilizing communities on a global scale. It is important to identify and promote laws and policies that successfully protect, monitor and regulate combating desertification. We look forward to working closely together with the World Future Council.”

The winners of the 2017 Future Policy Award will be recognized in a formal ceremony with the participation of ministers, decision-makers and the media during the Thirteenth session of the Conference of the Parties to the UNCCD (COP13), which is scheduled to take place in September 2017 in Ordos, China.

Desertification and land degradation are among the greatest environmental challenges of our time and a threat to the food security, livelihoods and health of hundreds of millions of people. More than 1.5 billion people in the world depend on degrading land for their daily needs. Droughts kill more people than any other single weather-related catastrophe and can amplify tensions within and between communities. It is estimated that 135 million people are at risk of being displaced by desertification. Drylands are the most conflict-prone regions of the world.

“The World Future Council looks forward to further collaboration with the Convention Secretariat in identifying and spreading best practices in combating desertification policies in the interest of future generations. It is crucial to learn from the policies that are already making an impact,’’ said Alexandra Wandel, Director of the World Future Council.

More recently, world leaders committed in 2015 to Sustainable Development Goal 15, target 3 of which calls on them to: “By 2030, combat desertification, restore degraded land and soil, including land affected by desertification, drought and floods, and strive to achieve a land degradation-neutral world.” To combat desertification and protect life in the drylands, decision-makers must enact, implement and expand policies for the conservation and sustainable management of land and water resources.

The memorandum of understanding kicks off the cooperation on the Future Policy Award 2017 to combat desertification.

The United Nations Convention to Combat Desertification (UNCCD) is the only legally binding international agreement on land issues. The Convention promotes good land stewardship. Its 195 Parties aim, through partnerships, to implement the Convention and achieve the Sustainable Development Goals. The end goal is to protect our land, from over-use and drought, so it can continue to provide us all with food, water and energy. By sustainably managing land and striving to achieve land degradation neutrality, now and in the future, we will reduce the impact of climate change, avoid conflict over natural resources and help communities to thrive.