On December 8th, 2016, the United Nations in Geneva marked UN Human Rights Day in dramatic style. The UN Library in Geneva partnered with World Future Council, Geneva Academy and the UN Missions of Afghanistan and Cyprus to host an event entitled ‘The Transformative Power of Justice’ featuring an unprecedented format of theatre, music, poetry, testimonies and a high-level roundtable dialogue.

Following an evocative welcome by the UN Library Director, Mr. Francesco Pisani, Mr. Adam Abdelmoula, Director of the Human Rights Council and Treaty Mechanisms Division at the Office of the High Commissioner for Human Rights, set the scene by underlining the challenges of securing human rights in the today’s turbulent context, and engaging the participation of all citizens of the world.

“This invites us to witness what is, to imagine what can be, and to enact the change we need in our lives and in the world.”

A diverse group of MA students from 5 continents, 28 nationalities, and collectively speaking over 16 languages, offered a multi-cultural production on transformative justice and human rights through the arts. They are the first generation of the Master of Advanced Studies in Transitional Justice, Human Rights and The Rule of Law at the Geneva Academy of International Humanitarian Law and Human Rights. As part of their program, the students were introduced by Dr. Rama Mani to Transformative Justice and the Theatre of Transformation, which in Mani’s own words “invites us to witness what is, to imagine what can be, and to enact the change we need in our lives and in the world”. In the words of the MA students, through this course, “Professor Mani opened our spirits into a different way of thinking and applying transformative justice in post conflict societies. She helped us dream big and envision the changes we want to make in this world.” 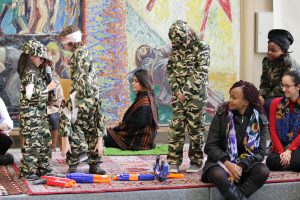 The power to enact transformative justice was potently portrayed in the students’ presentation. Starting with poignant renditions of ancient and original poems on justice in Persian and Arabic, students representing all five continents converged to offer a riveting Theatre of Transformation performance. They enacted brief testimonies of victims and perpetrators from around the world who, stage by stage, witnessed destruction, awakened new possibilities, envisioned change, and enacted transformation in their lives and in society. The students’ performance culminated poignantly with one MA student’s four small children portraying child soldiers who reject their weapons and choose to build peace for future generations. Mani then enacted three evocative real-life testimonies of individuals she has met and collaborated with in post-conflict countries, to demonstrate the two key messages of Transformative justice: in order to be transformative for individuals and societies as a whole, justice has to

(i) include all people in society, whether victims, perpetrators, bystanders or beneficiaries, and

(ii) integrate all dimensions of injustice, cultural, ecological, and metaphysical, in addition to legal and political.

An unforgettable highlight was the music performed by Paul Grant, the world-renowned maestro of Indian, Iranian, Afghan and Kashmiri music (www.Paulgrant.net). Mr Grant, who has been instrumental in preserving the ancient musical traditions of war-torn countries like Afghanistan, lent his blissful melodies on sitar, santoor and table to accompany the entire performance and enrapture the audience. 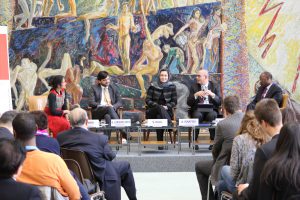 Roundtable with Ambassadors from Cyprus, Colombia and Afghanistan, chaired by Dr Mani.

The performance paved the way for a profoundly insightful high-level roundtable, featuring Ambassador S. Dalil from Afghanistan, Ambassador A. Ignatiou from Cyprus, Mr. Valencia representing Ambassador Londoño Soto from Colombia, and Mr. Abdelmoula from the Office of the High Commissioner for Human Rights. Each speaker commended the students for bringing to life so creatively and compellingly this transformative approach to justice and rights. Each speaker expressed how the joint performance had affected them personally and informed them professionally. In turn, each of the distinguished panellists brilliantly applied the transformative justice lens to analyse the journey and lessons learned in each of their countries, and from their own diverse experience.

Ambassador Dalil’s illuminating analysis of Afghanistan underscored the need to redress structural injustice and recognise the interdependence between security, justice and development. The lessons learned from Afghanistan emphasise that justice has to empower the community and be bottom-up, inclusive and human-centred. “Justice has to be population-owned and population-managed,” she concluded.

Justice has to empower the community and be bottom-up, inclusive and human-centred.

Ambassador Ignatiou reiterated the key learning from the students’ performance that transformative justice has to be comprehensive, broad and inclusive. His fine analysis of the complex conflict in Cyprus demonstrated, through several examples, that although ‘the past doesn’t rest neatly in the past but affects the future and the present,’ it is still possible to pursue reconciliation and cultural justice even concluding peace.

Ambassador Londono was represented by Counsellor Mr. Valencia, who pointed out that “justice has been the most complex and most criticized” part of the peace process in Colombia. Yet, Colombia’s justice package marks a turning point for Transitional Justice, as it is innovative in its integrality and holistic nature, with truly transformative potential for Colombian society and for the future of transitional justice.

Mr Abdelmoula drew on his extensive experiences addressing transitional justice from Somalia to Iraq to Liberia to point out that ‘no country is immune to conflict’. He noted that ‘forgive and forget is the cause for repetition’ of conflict. He recommended that to avoid this vicious cycle it is essential “to dig deeper, analyse, expose and keep memory alive,” and he underlined the imperative to give a much greater leadership role to women in justice and peace.

The lively interaction with the highly diverse audience raised pertinent concerns, fascinating questions and insightful remarks on the diverse dimensions and applications of transformative justice.

This unique and fascinating event exposed the convergence between students, speakers and audience members on the need for a new, inclusive and transformative approach to justice. It confirmed that the human dimension is key to restore justice and build peace. They confirmed that arts, culture and creativity are essential to chart new avenues to secure rights in today’s turbulent context. It reminded us that the principles and practices of transformative justice are not new but timeless, harking back to indigenous cultures and ancient civilizations around the world. It reaffirmed that in today’s divisive context it is essential to go beyond retribution and build inclusive, integrated and transformative justice to secure durable peace. 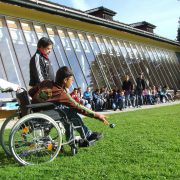 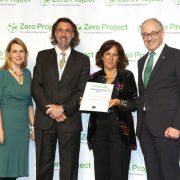 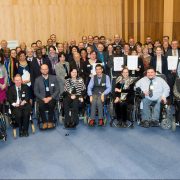 Sixth Zero Project Conference will be held in Vienna 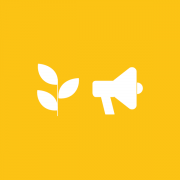 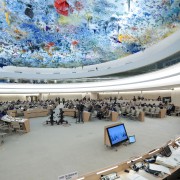 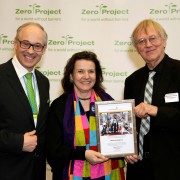 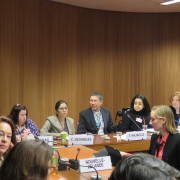