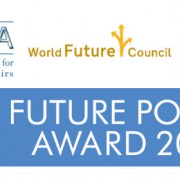 Hamburg/Geneva/New York – 23 October 2013: The “Treaty for the Prohibition of Nuclear Weapons in Latin America and the Caribbean” (a.k.a. the “Treaty of Tlatelolco”) was today proclaimed winner of the 2013 Future Policy Award for sustainable disarmament, beating 24 other nominated policies to the prize. The award will be presented at a ceremony this evening at UN Headquarters by the World Future Council, the UN Office for Disarmament Affairs (UNODA) and the Inter-Parliamentary Union (IPU).

END_OF_DOCUMENT_TOKEN_TO_BE_REPLACED

Hamburg/Geneva/New York – 7 October 2013: Seven disarmament policies from five continents have been shortlisted as final contenders for the 2013 Future Policy Award.

END_OF_DOCUMENT_TOKEN_TO_BE_REPLACED

Hamburg/Geneva/New York– 6 June 2013: The World Future Council has today announced the nominations of the Future Policy Award 2013. In partnership with the United Nations Office for Disarmament Affairs (UNODA) and the Inter-Parliamentary Union (IPU), this year’s award seeks to highlight disarmament policies that contribute to the achievement of peace, sustainable development and human security. In response to a worldwide call for nominations, the World Future Council has received 25 nominations of best policy practice from all continents.

END_OF_DOCUMENT_TOKEN_TO_BE_REPLACED

A Tank made of Bread

Hamburg / Rio de Janeiro, 15. June – A lifesize Tank made of Bread will support our Rio+20 appeal to redirect military spending to fund human needs and sustainable development. To demand the Rio+20 Earth Summit to address this issue, the initiative already counts with the endorsement of over 30 Nobel Prize laureates among other respected personalities (see full list).

END_OF_DOCUMENT_TOKEN_TO_BE_REPLACED

Uncovering the oft-neglected linkages between nuclear and climate risks

Hamburg / London, 12 September 2011. Climate change will be the focus on Wednesday, 14 September, when Al Gore follows up his award-winning film “An Inconvenient Truth” with the Climate Reality Project (www.climaterealityproject.org), a 24-hour campaign aimed at revealing the complete truth of the climate crisis.

END_OF_DOCUMENT_TOKEN_TO_BE_REPLACED

Hamburg, Germany, 17th of May: The World Future Council (WFC) released its latest report today, entitled Climate Change, Nuclear Risks and Nuclear Disarmament: From Security Threats to Sustainable Peace. It is the outcome of groundbreaking research by a member of the WFC Peace and Disarmament Working Group, Prof. Dr. Jürgen Scheffran of the University of Hamburg.