Violence against women and girls is a global challenge that requires effective, comprehensive and immediate policy solutions. Recent data shows that at least 30% of women worldwide have suffered physical and/or sexual intimate partner violence,  confirming the urgency of the matter on a global scale. Fortunately, in some parts of the world, local initiatives and frameworks have already proven highly successful in tackling gender-based and domestic violence, which can serve as examples to the global community.

The “Coordinated Community Response (CCR) to Domestic Violence” implemented in Minnesota (USA) is one of those initiatives. Also known as the “Duluth Model”, the method has been successfully protecting women from domestic violence for more than 30 years. For this, it was awarded the 2014 Future Policy Award as the world’s best policy addressing domestic violence. In April 2016, our team travelled to Minnesota, US, to facilitate a workshop that aimed to spread this comprehensive policy to other communities.

The “Coordinated Community Response (CCR) to Domestic Violence” workshop brought together advocates, law enforcement officers, legal professionals and policy-makers from six different countries (Kazakhstan, Latvia, Lithuania, Pakistan, Tajikistan, and Trinidad & Tobago) to explore and witness first-hand the key principles of CCR as it is being implemented in Duluth (Minnesota, USA). This method, also referred to as the “Duluth Model”, promotes cooperation of all relevant actors, such as police and probation officers, prosecutors, and NGO advocates, working to prevent and combat domestic violence. This coordination effort proves as a highly effective approach for the implementation of domestic violence laws and focuses on victims’ safety and offender accountability.

The workshop provided an extraordinary opportunity for participants to learn the techniques of CCR from its designers/founders/initiators – and in the community that has most successfully implemented it – and develop an understanding and framework from which to respond to domestic violence in their own communities.

The World Future Council (WFC) was a funding partner of this nine-day workshop, planned and hosted by Global Rights for Women (GRW), a Twin Cities based non-profit, and presented in partnership with Domestic Abuse Intervention Programs (DAIP) out of Duluth, Minnesota. The workshop took place from 28 March to 5 April 2016. 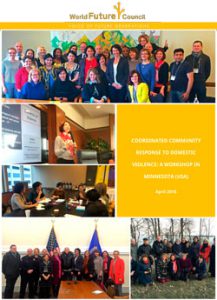 In 2014, the Duluth model was named the world’s best policy to address violence against women and girls by the World Future Council (WFC), UN Women, and the Inter-Parliamentary Union (IPU). Our Future Policy Award highlights the world’s best policy approaches to the most pressing political challenges that the global community is facing today. In 2014, the award was dedicated to celebrate the best laws and policies that contribute to ending one of the most pervasive human rights violations of our time: violence against women and girls.

The World Future Council will continue to work with our partners to facilitate the transfer of knowledge between policymakers and their NGO counterparts and to support them in introducing the model in their communities.

GRW is a non-governmental organization that envisions a world where women’s human rights to equality and freedom from violence are fully realized.

The DAIP strives to end violence against women and promote victim safety through innovative training and institutional changes.

The WFC participated in the Working Group on Access to Justice for Undocumented Women, convened by PICUM (Platform for International Cooperation on Undocumented Migrants) in Brussels on 10 November 2015.

The meeting focused on strategies for advancing undocumented women’s access to protection, services and justice.

Karin Heisecke, Senior Project Manager, participated in the session “Mechanisms for Monitoring Undocumented Victims’ Access to Services, Protection and Justice, at the European Level” and gave a presentation on the Istanbul Convention as a tool for preventing and addressing violence against undocumented women.

The WFC took part in the 3rd World Conference of Women’s Shelters in The Hague. The conference, organised by the Global Network of Women’s Shelters, brought together more than 1000 advocates and activists representing 115 countries. 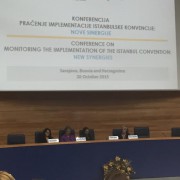 The WFC participated in a conference organised by the Council of Europe in Sarajevo (Bosnia and Herzegovina) on 20 October 2015: “Monitoring the implementation of the Istanbul Convention: new synergies”. 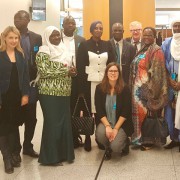 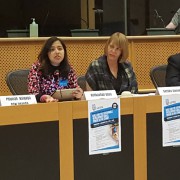