This Valentine’s Day, instead of splurging on roses and chocolates, why not do something different and take a moment with that special someone to commemorate the 50th anniversary of one of the most important multilateral treaties, of which you have probably never heard: the Treaty of Tlatelolco.

As the nuclear stand-off between the United States and the Soviet Union came to a head in 1962 with the Cuban Missile Crisis, Latin American governments became compelled to begin a process that would ensure that the region would never become the setting of a nuclear conflict. 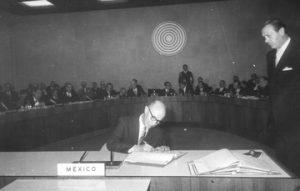 On 14 February 1967, Latin American and Caribbean nations (with the exception of Cuba) came together in the Tlatelolco district of Mexico City for a uniquely innovative initiative: to sign a treaty banning nuclear weapons from their continent. Although Antarctica had been declared a nuclear-weapon-free zone under the 1959 Antarctica Treaty, the Tlatelolco Treaty (or Treaty for the Prohibition of Nuclear Weapons in Latin America and the Caribbean) was the first to establish such a zone over a densely populated region.

That framework included the creation of OPANAL, an agency dedicated to achieving universalisation of the Treaty and ensuring compliance. OPANAL’s contribution is demonstrated by its continuing engagement in initiatives to promote the Treaty around the world, educate on the need for nuclear disarmament, and strengthen cooperation between all states belonging to nuclear-weapon-free zones. Taken together, the Treaty and OPANAL are best understood as a system which has not only achieved the denuclearisation of a region but also promotes and facilitates peace and cooperative security.

It has also been uniquely successful in gaining legally binding recognition by all five of the official nuclear weapon states recognised in the nuclear 1968 Non-Proliferation Treaty (United States, United Kingdom, France, China and Russia) not to use or threaten to use nuclear weapons against States party to the treaty.

Most importantly, as the first to successfully implement a fully-fledged, legally binding nuclear-weapon-free zone policy in a highly populated area, the Treaty of Tlatelolco serves as a legal precedent and an inspiration to other regions. The significance of this success is demonstrated by the fact that to-date 114 United Nations Member States, more than half of the UN membership, have signed regional nuclear-weapon-free zone treaties (1985 Treaty of Rarotonga for the South Pacific, 1995 Treaty of Bangkok for Southeast Asia, 1996 Treaty of Pelindaba for Africa and the 2006 Treaty of Semipalatinsk for Central Asia) covering the entire Southern Hemisphere together with parts of the Northern Hemisphere with such zones. That is, ultimately, Tlatelolco’s most important legacy.

The late Mexican Ambassador Alfonso García Robles, who in 1982 received the Nobel Peace Prize jointly with Alva Myrdal for his crucial role in launching and implementing the Tlatelolco Treaty, was all too aware of the Treaty’s potential in this regard, when he said:

“Nuclear-Weapon-Free-Zones not only contribute to averting regional nuclear proliferation but also lead to global nuclear disarmament: we should attempt to achieve a gradual broadening of the zones of the world from which nuclear weapons are prohibited to a point where the territories of Powers which possess those terrible tools of mass destruction will become something like contaminated islets subjected to quarantine.”

To fully understand the Treaty’s effect and importance, one must appreciate the zeitgeist of those Cold War years: the world had stood on the brink of nuclear war during the Cuban Missile Crisis of October 1962, the nuclear arms race between the Soviet Union and the United States had reached dizzying speeds (each side churning out hundreds of nuclear warheads every month even though the capacity to exterminate humanity had long been surpassed), the concept of Mutually Assured Destruction (MAD) had started to play a major part in both countries’ defence doctrines and the number of nuclear-armed countries had grown to five in two decades with many expecting that number to grow much faster in the coming years. As a result, people the world over experienced a sense of helplessness and fatalism about the future of humanity. 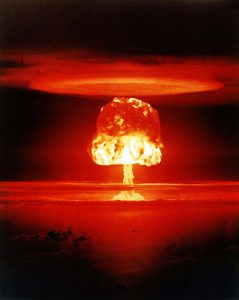 It is against this backdrop that the significance of the Tlatelolco Treaty comes into clearer view. Through the Tlatelolco project, Latin America and the Caribbean loudly and clearly said NO to nuclear weapons. The importance of this emphatic rejection of the notion that you can base your security by relying on these instruments of annihilation cannot be overstated.

Half a century since the Treaty was opened for signature, the nuclear threat is still with us and continues to morph into hitherto unfathomable menaces, including nuclear terrorism, cyber threats to nuclear systems and the continued risks of launch by accident or miscalculation. Those states possessing nuclear weapons show no intention of honouring their obligations under international law to fully disarm their arsenals. Rather, they seem committed to preserving their nuclear capability indefinitely, spend vast sums on upgrading and maintaining their arsenals and continue to premise their security and defence postures on the threat of waging nuclear war.

So, what can we still learn from Tlatelolco today?

Firstly, the Tlatelolco Treaty still serves as an inspiration and model for additional nuclear-weapon-free zones. Recent zone proposals cover regions with complex security environments as well as nuclear doctrines, including the Middle East, Northeast Asia, the Arctic, Europe and South Asia. While each is different in scope and background, advancing these proposals could benefit greatly from lessons of the Tlatelolco experience and the expertise of OPANAL.

Secondly, the Tlatelolco process can inspire both nuclear-armed states and non-nuclear countries alike in advancing other nuclear disarmament initiatives. The extraordinary persistence, creativity and foresight of the drafters of the Tlatelolco Treaty is sorely needed today.

Alfonso García Robles noted on 14 February, 1967: “We have worked for the benefit of not only our own countries and of Latin America but also, in this world of interdependence in which we live, for the good of mankind.” Let us try to recapture the extraordinary persistence, creativity and foresight of the initiators of the Tlatelolco Treaty and achieve what they always had in mind: the universal prohibition and elimination of nuclear weapons.

Coordinator of the Disarmament Programme of the World Future Council