Geneva, October 26, 2016: ‘Move the Nuclear Weapons Money: A handbook for civil society and legislators’, was launched yesterday at the 135th Assembly of the Inter-Parliamentary Union, an organisation of 170 member parliaments from around the world.

The handbook, published by the International Peace Bureau, World Future Council (WFC) and Parliamentarians for Nuclear Non-proliferation and Disarmament (PNND), was launched as part of deliberations at the IPU Assembly on the issue of military spending versus Sustainable Development Goals (SDGs).

‘Over $100 billion is spent annually on nuclear weapons – funds that are sorely needed to meet the SDGs,’ says Saber Chowdhury, IPU President. ‘Parliamentarians have a key role to play in setting budgets, developing policy and providing oversight on government investments. This handbook provides a guide for effective parliamentary action to invest in peace and sustainability rather than on maintaining the threat of nuclear war.’

‘There is a growing international movement to highlight the opportunity costs of military spending,’ says Colin Archer, Secretary-General of the International Peace Bureau. ‘However, this movement is currently up against the lobbying power of the nuclear weapons corporations, who are making 20 times more from nuclear weapons spending than is spent on the entire United Nations budget. This handbook provides ideas and approaches to challenge and convert this power.’

‘Governments and civil society are struggling to fund the resources to implement the Sustainable Development Goals,’ says Alyn Ware, PNND Global Coordinator and WFC Councillor. ‘It is up to civil society, working in cooperation with legislators, to highlight the connection between nuclear disarmament and sustainable development, in order to build more effective cooperative action. This handbook opens the door to such cooperation.’ 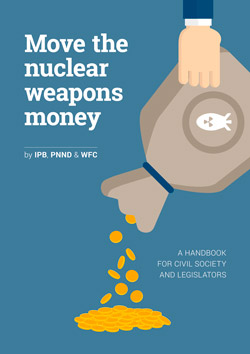 Breakthrough: How to claim back our future Scroll to top