More than 70% of the experts interviewed for the new REN21 Global Future Report consider a global transition to 100% renewable energy to be both feasible and realistic. Especially European and Australian experts most strongly support this view. There is an overwhelming consensus that renewable power will dominate in the future, with many noting that even large international corporations are increasingly choosing renewable energy products either from utilities or through direct investment in their own generating capacity. In fact, the report highlights as well that numerous companies, regions, islands and cities have set 100% renewable energy targets already, proving that it is a matter of political will. Nearly 70% of those interviewed expect the cost of renewables to continue to fall, beating all fossil fuels within 10 years’ time. Wind and solar photovoltaic are in fact already cost-competitive with new conventional generation in most OECD countries. Countries as diverse as China and Denmark are demonstrating that GDP growth can be decoupled from increasing energy consumption. 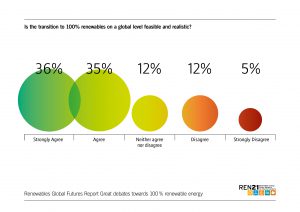 The Global Future Report was commissioned by REN21, supported by the German Federal Ministry for Economic Cooperation and Development (BMZ), the German Federal Ministry for Economic Affairs and Energy (BMWi) and the World Future Council. Several regional stakeholders such as the the Institute for Advanced Sustainability Studies (IASS), the National Renewable Energy Laboratory (NREL) and the Renewable Energy Institute (REI Japan) provided capacity, ensuring maximal outreach to experts. The report analyses the views of 114 renowned energy experts from every region of the world, interviewed over the course of 2016. The results are clustered under topics defined as “12 Great Debates.” It is launched at the Sustainable Energy for All Forum in New York.

Of direct relevance to the Forum, more than 90% of the experts interviewed agree that renewable energy technologies serve to lower the barrier for communities to gain access to energy services. An estimated 100 million people now receive electricity via distributed renewable energy systems, and markets for such systems are growing rapidly. In some regions, most notably Africa, the US and Japan, experts were skeptical about reaching 100% renewable energy supply in their own countries or regions by 2050, largely due to the vested interests of the conventional energy industry. Regarding the transport sector, drop-in solutions will not be sufficient to achieve the necessary transformation such as the replacement of combustion engines with electric drives. According to the interviewed experts, a modal shift will be required, for example from road to rail. Finally, the lack of long-term policy certainty and the absence of a stable climate for investment in energy efficiency and renewables hinder development in most countries.

Anna Leidreiter, Senior Programme Manager, WFC: “The Global Future Report proves again that 100% Renewable Energy is a matter of political will. The technologies exist. The economics urge the transformation and for societal and environmental well-being, 100% RE is a prerequisite. Building capacity among political decision-makers is therefore more needed than ever.”

Arthouros Zervos, Chair of REN21: “When REN21 was founded in 2004, the future of renewable energy looked very different than it does today. Back then, no one could have imagined that in 2016: renewable energy would account for 86% of all new EU power installations; China would become the renewable energy powerhouse of the world; and more than half of global renewable energy investment would take place in emerging economies and developing countries. Calls then for 100 % renewable energy were not taken seriously; today the world’s leading energy experts are engaged in rational discussions about its feasibility, and in what time frame.”

Christine Lins, Executive Secretary of REN21: “This report presents a wide range of expert opinions, and is meant to spur discussion and debate about both the opportunities and challenges of achieving a 100% renewable energy future by mid-century. Wishful thinking won’t get us there; only by fully understanding the challenges and engaging in informed debate about how to overcome them, can governments adopt the right policies and financial incentives to accelerate the pace of deployment.”

REN21 brings together governments, non-governmental organisations, research and academic institutions, international organisations and industry to learn from one another and build on successes that advance renewable energy.  To assist decision-making process, REN21 provides high-quality information, catalyses discussion and debate, and supports the development of thematic networks.