Today, REN21 published the most comprehensive annual overview of the state of renewable energy. The Renewables 2016 Global Status Report reveals that renewables are now firmly established as competitive, mainstream sources of energy in many countries around the world.

And not only that: for the first time, the Global Status Report features community energy as a remarkable trend in the energy market. The World Future Council was honoured to author the chapter on community energy and hereby share the vast experiences our staff members have gathered across the world.

“As renewables secure record investments year after year, we are seeing that it is local governments, communities and citizens who are the real pioneers of this transition to a world powered by 100% renewable energy.” says Anna Leidreiter, WFC’s Senior Programme Manager Climate Energy. “Their support is logical really – renewable energy delivers impact locally and therefore most cities and communities see a huge benefit in investing in renewable sources to ensure that revenues stay in the region.” 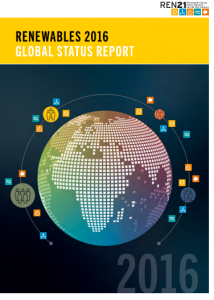 In 2015, renewable power generating capacity saw its largest increase ever, with an estimated 147 gigawatts (GW) added. Modern renewable heat capacity also continued to rise, and renewables use expanded in the transport sector. Distributed renewable energy is advancing rapidly to close the gap between the energy haves- and have-nots.

These results were driven by several factors. First and foremost, renewables are now cost competitive with fossil fuels in many markets. In addition, government leadership continues to play a key role in driving the growth of renewables, particularly wind and solar, in the power sector. As of early 2016, 173 countries had renewable energy targets in place and 146 countries had support policies. Cities, communities and companies are leading the rapidly expanding “100% renewable” movement, playing a vital role in advancing the global energy transition.