The World Future Council in partnership with UN-Habitat and UCLG is hosting a Side Event at the Habitat III Prep Com III in Surabaya on Tuesday 26th of July. Experts from around the world will discuss the key role of public spaces within the regenerative city framework with a particular focus on China and the Asia Pacific Region.

A new type of urban development powered by clean renewable energy, driven by a circular economy and defined by a restorative and mutually beneficial relationship between cities and their hinterland is urgently needed. Given the extensive threats of climate change, environmental pollution and degrading natural resources cities need to shift their current linear metabolism to a circular, regenerative one that can positively enhance rather than undermine the ecosystems and natural resources on which they depend. This will mean creating cities that actively contribute to the regeneration of the natural resources they consume and the ecosystem services they rely on.  This will considerably affect how cities are planned and designed. Public spaces in particular will be affected. The panel discussion will explore the linkages and overlaps between public space and regenerative urban development, in particular how creating more regenerative cities will also mean developing more healthy, inclusive, accessible and liveable public spaces.

In summary, the panel discussion will focus on: 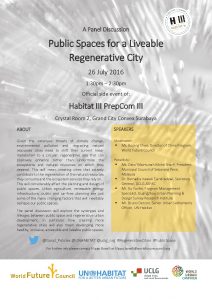 Happy International Day for the Total Elimination of Nuclear Weapons!