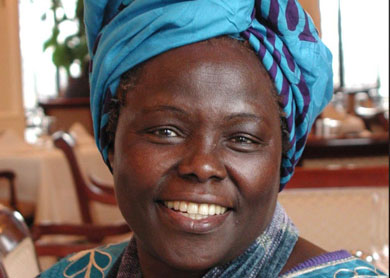 Kenyan born Wangari Maathai was the first woman in East and Central Africa to earn a doctorate degree. Prof. Maathai pursued her doctoral studies in Germany and at the University of Nairobi, obtaining a Ph. D. from the University of Nairobi where she also taught veterinary anatomy. Prof. Maathai was active in the National Council of Women of Kenya from 1976 to 1987 and chaired it from 1981 to1987. In 1976, while she was serving the National Council of Women, she introduced the idea of community-based tree planting. She continued to develop this idea into a broad-based grassroots organization whose main focus is poverty reduction and environmental conservation through tree planting. With the organization which became known as the Green Belt Movement

Prof. Maathai has assisted women in planting more than 40 million trees on community lands including farms, schools and church compounds. In December 2002 she was elected to Kenya’s parliament and from 2003 to 2007 Prof. Maathai served as Assistant Minister for Environment and Natural Resources. She is internationally recognized for her persistent struggle for democracy, human rights and environmental conservation. In 1984 she received the Right Livelihood Award. 20 years later she was the first African woman to receive the Nobel Peace Prize. In April 2006 the French President Jacques Chirac honoured Professor Maathai with France’s highest honour, the “Légion d’Honneur”.