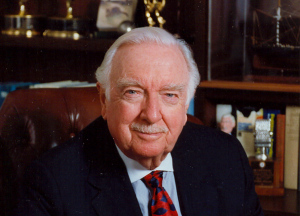 Former Broadcast Journalist – Mr. Kronkite, the former managing editor of the CBS Evening News with Walter Cronkite, has been called “the most trusted man in America.”

Born in St. Joseph, Missouri, Mr. Cronkite began his career as a news writer and editor for Scripps-Howard and United Press. He was a war correspondent for United Press and, after the war, reopened news bureaus for UP in Amsterdam and Brussels. Mr. Cronkite was the chief correspondent covering the Nuremberg trials and also served as bureau manager in Moscow. In 1950 he joined CBS as a television correspondent.

Mr. Cronkite is the recipient of a Peabody Award, the William White Award for Journalistic Merit, an Emmy Award from the Academy of Television Arts and Sciences, the George Polk Journalism Award, and a Gold Medal from the International Radio and Television Society. He is a long-time member of the Society of Professional Journalists.

His 1996 autobiography, A Reporter’s Life, was a bestseller. An avid sailor, Mr. Cronkite wrote the text for South by Southeast, a record of his impressions sailing the waterways from Chesapeake Bay to Key West. A sequel, North by Northeast, was also published.