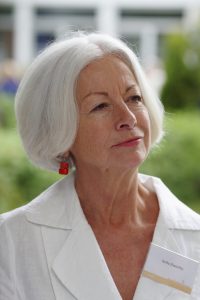 Dr Scilla Elworthy founded the Oxford Research Group (ORG) in 1982 to develop effective dialogue between nuclear weapons policy-makers worldwide and their critics. In 2003 she founded Peace Direct to fund, promote and learn from peace-builders in conflict areas; Peace Direct was named ‘Best New Charity’ at the Charity Awards in 2005. Since 2005 she has been an adviser to The Elders initiative and was appointed a member of the International Task Force on Preventive Diplomacy in 2007. Dr Elworthy was awarded the Niwano Peace Prize in 2003 and nominated three times for the Nobel Peace Prize for her work with ORG.

She is a Councillor of the World Future Council.