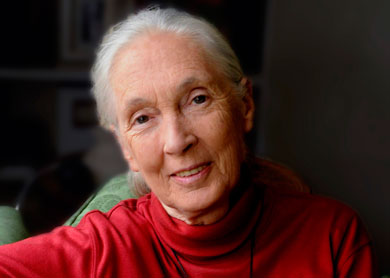 In July 1960, Jane Goodall began her landmark study of chimpanzee behavior in the Gombe National Park in Tanzania. She is an Ethologist and conservationist known for her long term study into the lives of wild chimpanzees of Gombe in western Tanzania.

In 1977, she established the Jane Goodall Institute, which continues the Gombe research and is a global leader in the effort to protect chimpanzees and their habitats. The Institute is widely recognized for innovative, community-centered conservation and development programs in Africa, and its global environmental and humanitarian youth program “Roots & Shoots”. For more information see www.janegoodall.org

Jane Goodall’s honors include the French Legion of Honor, the Medal of Tanzania, and Japan’s prestigious Kyoto Prize. In 2002, Jane Goodall was appointed to serve as a United Nations Messenger of Peace and in 2003, she was named a Dame of the British Empire. In 2010, Jane Goodall received the international Human Rights Prize Golden Dove.