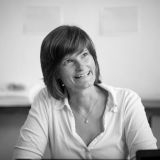 Ilsabe von Campenhausen studied history and literature in Tübingen, Munich, and Aix-en-Provence, obtaining a French and German master degree, and Chinese as a foreign language in Suzhou, P.R. China.

She started her career in reproductive health and development cooperation at the German Foundation for World Population. Later, she built up the demographic think tank Berlin Institute for Population and Development as vice president. After living and working several years abroad, she founded an intercultural consultancy.

Since 2009, she heads a variety of leadership programs at the BMW Foundation Herbert Quandt to promote cross-sector collaboration and engagement for the implementation of the 2030 Agenda on a global scale. The married mother of three children works in Berlin and lives in Hamburg.

Ilsabe von Campenhausen has been a member of the SB since 2019.