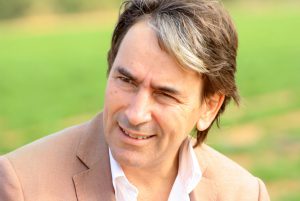 CEO of the SEKEM Initiative, President of Demeter International

Helmy Abouleish, born 1961 in Graz, Austria, is CEO of the SEKEM Initiative in Egypt, founded by his father Ibrahim Abouleish in 1977. SEKEM promotes sustainable development in ecology, economy, societal and cultural life. The SEKEM Holding produces, processes and markets organic and biodynamic foodstuff, textiles and herbal medicine in Egypt, Arabia and internationally. They also operate educational facilities. SEKEM is regarded as the Egyptian pioneer in organic farming, and was awarded the Right Livelihood Award (‘Alternative Nobel Prize’) in 2003.

Helmy Abouleish has been deeply involved in SEKEM since it was founded. He studied economics and marketing in Cairo and was for a long time campaigning in national and international politics to promote responsible competitiveness, social entrepreneurship and tackling the greatest challenges of the 21st century, such as climate change and food security. He is also member of a number of international organizations and councils, such as Fair Trade USA. In June 2018 he was elected as president of Demeter International.

Helmy Abouleish became a member of the World Future Council in September 2017.