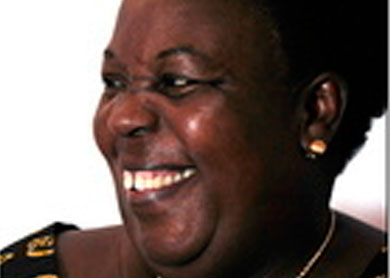 Special Advisor to the ECA Executive Secretary and to the UNESCO Director General; Founder, Advocacy for Women in Africa (AWA); Former President of the Pan-African Parliament.

Dr Amb. Gertrude Mongella was born in 1945 on a small island in Lake Victoria in Tanzania. After graduating as a teacher from University of Dar es Salaam, she worked in several ministries among others for Julius K. Nyerere and Ali H. Mwinyi in her home country until beginning of 1990. In 1991, Mongella was appointed Tanzania’s High Commissioner to India. Two years later, the strong-minded feminist became a diplomat to the UN and led the fourth World Conference on Women 1993-1995. As General Secretary and Chair she significantly contributed to the success of this conference and has since been known as “Mama Peking”.

Her diplomatic obligations in India did not prevent Mongella from keeping apace with her other interests. She served as a member of the Board of Trustees of the UN’s International Research and Training Institute for the Advancement of Women (INSTRAW), as a member of the Global Assembly on Women and the Environment, the World Women’s Congress for a Healthy Planet as well as the Tanzanian Association of Women Leaders in Agriculture and Environment. In March 2004, Mongella was elected as the first President of the Pan-African Parliament. She is highly committed to the political integration of Africa, as well as championing a strong involvement of women in political leadership. As such the inspiring feminist joined the Movement’s Global Coalition of Women Defending Peace in its Mission to Palestine, which supported Palestinian women to gain power in political processes. More recently Dr Amb. Gertrude Mongella became Tanzania’s Goodwill Ambassador to the World Health Organization, a special advisor to the Economic Commission of Africa, and a member of the AU’s African Women’s Committee for Peace and Development. She is a member of the World Future Council.