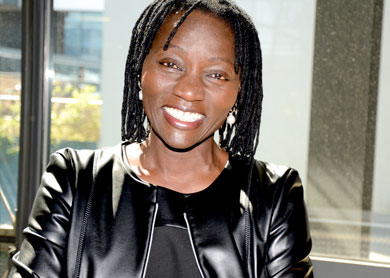 Dr. Auma Obama was born in Kenya and grew up there. She studied in Germany and completed her master’s degree at the University of Heidelberg. Following this, she successfully completed another degree programme at the German Film and Television Academy in Berlin and received a doctoral degree from the University of Bayreuth at the same time.

For several years, Dr. Obama lived and worked in Germany and the UK before returning to Kenya, where she worked for the aid organisation CARE International. An important part of her work there was the establishment and coordination of the network ‘Sport for Social Change’. This initiative brought together organisations from different countries of East Africa, from Egypt and Bangladesh, in order to familiarise girls in particular with sport as a means for improving their own social situation.

Alongside her work for the foundation, Dr. Auma Obama is a member of the World Future Council, an organisation that works worldwide to promote responsible, sustainable thinking and action on behalf of future generations. She is also a member of the Board of Trustees of the ‘German Reading Foundation’ as well as a member of the Advisory Board of the Bayreuth Academy of Advanced African Studies at the University of Bayreuth. Dr. Auma Obama is a member of the Governing Council of the Kilimanjaro Initiative in Nairobi (Kenya), which organises an event once a year that offers which disadvantaged young people an opportunity to climb Kilimanjaro, Africa’s tallest mountain. This project gives these young people an opportunity to strengthen their self-confidence and put this to positively use in the community. Since 2014, Dr. Obama has been the Patron of the international Storymoja Festivals in Kenya. The festival serves as a platform to discover and inspire creative new talent, and specifically to promote reading and writing skills among children and teenagers.

Dr. Obama is also the initiator of the Sauti Kuu Act Now Awards, which were launched in Berlin in 2015. The awards recognise children and young people between the ages of 12 and 25 who dedicate themselves to social, humanitarian and environmental projects.

Dr. Auma Obama is also a widely read author. Her book, And Then Life Happens: A Memoir, was published in German in 2010 and subsequently translated into English. In great demand as a speaker, she is active at numerous events worldwide on topics of socio-economic development. Her focus here is on the relationship between the so-called ‘developing countries’ and the ‘developed states’.

The awards with which Dr. Auma Obama has been presented in recognition of her dedication to humanitarian efforts include the Prix Courage awarded by the German broadcaster ZDF in cooperation with Clarins, Paris (2014); the B.A.U.M. Award (2015); the World Human Rights Award (2015) by Look magazine; the Kiwanis Award (2016, Kiwanis Club Stuttgart); and the Deutscher Rednerpreis presented by the German Speakers Association (2015). Dr. Auma Obama is the sister of US President Barack Obama.