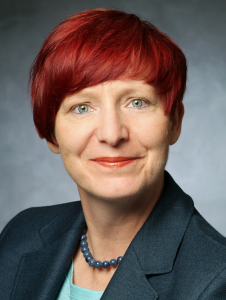 Anja Leetz holds a degree in teaching (1985, Germany) and a degree in photography (1995, UK) and is a certified foundation manager (2008, Germany). For the last eighteen years Anja worked for a number of environmental and health organisations in the UK and Belgium, such as Friends of the Earth and the European Environmental Bureau.

Between 2009-2018 Anja served as the Executive Director of Health Care Without Harm (HCWH) Europe in Brussels, where she initiated new programmes on climate change, procurement, pharmaceuticals in the environment and Antimicrobial Resistance. Anja has spoken widely at conferences across Europe, US and Asia on environmentally sustainable health systems. Anja is a co-founder of the Global Climate and Health Alliance and the Global Green and Healthy Hospital network. While working for HCWH Europe she represented the organisation at UN level at the Minamata convention, UNFCCC and SAICM negotiations, as well as at the World Health Assembly. Anja served on the advisory board for the ISC3 to the German Environment Ministry on chemicals and the WHO Euro region on environmentally sustainable health systems.

Currently Anja is a Board Director of the German Association for Climate Change and Health and pursues a M.Sc. in Global Health Policy at the University of Edinburgh while working as an Environmental Health Consultant. Anja is a Member of SCIANA, the European health leaders’ network, supported by the Robert Bosch Foundation.