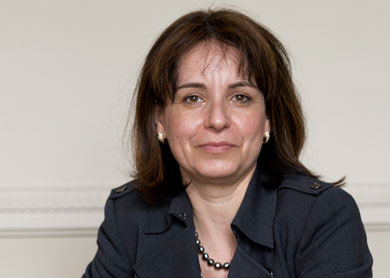 Director for Member Parliaments and External Relations at the Inter-Parliamentary Union (IPU).

Anda Filip has been with the Inter-Parliamentary Union since 2003. Formerly a diplomat with the Ministry of Foreign Affairs of Romania, she served as spokesperson of the Foreign Ministry, minister counselor at the Embassy of Romania in Washington DC and ambassador, permanent representative of Romania to the United Nations Office and other international organizations based in Geneva. She is a graduate of the University of Bucharest and the National School of Political Science and Public Administration, with a bachelor’s degree in philology and a master’s degree in international relations.

In 2003, shortly after the IPU gained permanent observer status with the United Nations, Ambassador Filip joined the IPU as Head of its Permanent Observer Office to the United Nations in New York, and led efforts to develop a parliamentary dimension to the work of the UN. Successive UN General Assembly Resolutions, as well as the elaboration of a series of practical tools and specialized parliamentary meetings accompanying major UN processes (in multiple areas including human rights, status of women, sustainable development and climate change), have aimed to mainstream the global agenda into the day-to day work of parliaments and help translate international commitments into national realities.

Since November 2011, Ms. Filip has been heading the IPU Division for Member Parliaments and External Relations at Headquarters in Geneva. Key responsibilities include strengthening relations with member parliaments, the organization of the statutory assemblies of the IPU every year and the World Conference of Speakers of Parliament every five years, and outreach and cooperation with other international organizations. Over the years, the IPU has worked closely with the World Future Council in support of the Future Policy Award – in particular the editions on disarmament (2013), ending violence against women and girls (2014), the rights of children (2015) and youth participation (2019).