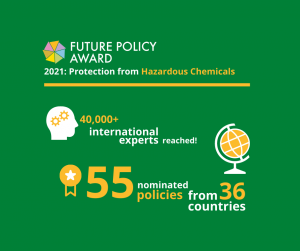 Hamburg/Geneva/New York/Paris, 10th November 2020 – 55 policies from 36 countries enter the race for the “Oscar on best policies”: The Future Policy Award (FPA) 2021 is looking for the world’s best policies that protect people and the environment from hazardous chemicals. The Call for Nominations reached over 40,000 experts from intergovernmental organisations, non-profit organisations, academic and research institutions, government agencies, and other notable organisations active in this field.

The Future Policy Award, an annual prize awarded by the World Future Council (WFC), showcases legislation and policies that create better living conditions for current and future generations. It is the first award for laws and policies and is celebrated on an international level. Each year, the World Future Council focuses on one topic on which policy progress is particularly urgent. The Future Policy Award 2021 highlights exemplary laws and policies that protect people and the environment from hazardous chemicals.  A dramatic number of deaths and illnesses are attributed to hazardous chemicals as well as air, water and soil pollution and contamination. Many children globally are born “pre-polluted” in utero, with numerous contaminants that impact on several of their rights. It is therefore critical that the protection from hazardous chemicals is strengthened – through inclusive, effective, inspiring, and innovative laws and policies.

The categories for which experts could nominate were as follows: The protection of human health and the environment from chemicals across the lifecycle  (14 nominations received), Highly Hazardous Pesticides (23), Lead in Paint (11), Policies that tackle hazardous (child) labour dealing with chemicals  (4) and Environmentally Persistent Pharmaceutical Pollutants (3). No policy on Chemicals in Plastic Products was nominated.

We received nominations on the national, regional, and urban/communal level from the following countries:

The path to finding the most exemplary policies is quite elaborate and involves several steps: In a first step, a Call for Nominations is disseminated to experts in this field. Secondly, nominations are being researched and collected: Thirdly, an evaluation team screens, discusses, and evaluates all nominated policies. In early 2021, we will present laws, policies, and legal frameworks for consideration by an international independent jury of experts. The jury will select and announce a shortlist of candidates by May 2021.

Finally, the winners of the Future Policy Award will be honoured at a high-level award ceremony at the fifth session of the International Conference on Chemicals Management (ICCM5) from 5-9 July 2021, held in Bonn (Germany).

The Future Policy Award is organised by the World Future Council in partnership with the United Nation Environment Programme (UNEP), the Strategic Approach to International Chemicals Management (SAICM), the International Labour Organisation (ILO), the Organisation for Economic Co-operation and Development (OECD) and the United Nations Institute for Training and Research (UNITAR),  United Nations Development Programme (UNDP), and with the support of the German Federal Ministry for the Environment, Nature Conservation, and Nuclear Safety (BMU), the German Environment Agency (UBA), the Michael Otto Foundation and the Jua Foundation.

The World Future Council (WFC) works to pass on a healthy and sustainable planet with just and peaceful societies to our children and grandchildren. To achieve this, we focus on identifying, developing, highlighting, and spreading effective, future-just solutions for current challenges humanity is facing, and promote their implementation worldwide. The Council consists of 50 eminent global change-makers from governments, parliaments, civil societies, academia, the arts, and the business world. Jakob von Uexkull, the Founder of the Alternative Nobel Prize, launched the World Future Council in 2007. We are an independent, non-profit organisation under German law and finance our activities with institutional partnerships and donations.

This project is financially supported by

The publisher is responsible for the content of this publication.