Only within the last 16 months, the world has seen the emergence of the Sustainable Development Goals (SDG), the Paris agreement (which has just recently come into force), and the so-called New Urban Agenda (NUA). All three of them represent bold and (more or less) legally binding agreements by the Member States of the United Nations. The New Urban Agenda should be the most concrete and practical one since it addresses the smaller scale of government, i.e. cities – the place where we will win or lose our struggle for a more just, equitable and indeed sustainable world. 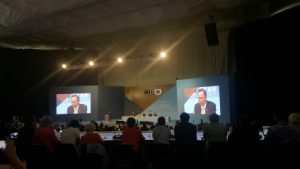 Yet, the urgency of a paradigm shift needed in how we develop cities was not highlighted as we think was necessary given the urgency of environmental degradation and climate change (mostly driven by unstainable patterns of development in cities). Secondly, the fact that this Habitat conference remains only an every-twenty-year conference casts doubts on how serious national governments are taking the issues of urbanization. Thirdly, measurable targets and binding objectives were almost untraceable in the agenda, which also will not facilitate implementation and tracking of results.

Nevertheless, many others important results were achieved and deserve recognition (including, among many others, strong references to inclusive development and several explicit references to gender equality, minorities and persons with disabilities).  Especially one message emerged stronger than any other both during the discussion at the Habitat III conference as well as in the New Urban Agenda: cities want and need more power- and new governance structures need to be established to make this happen.

Since much of the agenda´s implementation will fall right in the hands of sub-national governments, cities and municipalities from around the world have taken this opportunity to raise their voice and call for more power and control over their jurisdictions.  If national governments are serious about making this New Urban Agenda a reality, they will inevitably have re-think how they work with local governments and how power and authority is distributed across the various levels of government.

The New Urban Agenda is in fact full of references to the need of providing sub-national governments with more legroom to make decisions in their cities and mobilize the financial resources needed to drive sustainable development within their jurisdictions. Two questions come natural at this point. The first one is how much national governments are actually willing to give more power and authority to cities (and facilitate this process of decentralization). The second one is how this process of decentralization should actually be realised.

The WFC Climate, Energy and Cities Commission is convinced that this necessary process of decentralization should be institutionalized. Well-structured platforms to improve the collaboration between national and subnational governments (also known as multi-level governance) should be established in countries around the world. We call these platforms National Urban Policy Commissions. These would be cross-ministerial and cross-governmental commissions co-led by national, regional and local governments, which would help to bridge incompatibilities between local and national legislations and hence help the effective and consistent implementation of national programmes and international agreements such as the New Urban Agenda within the local context.

By Stefan Schurig and Filippo Boselli