Two principal threats of our time 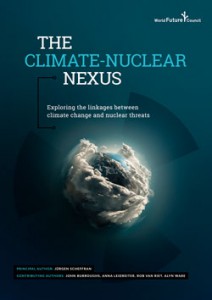 The report was updated in April 2016

As the Word Future Council has highlighted in a recent report, climate change and nuclear weapons interact with each other in a range of ways. Conflicts induced or exacerbated by climate change could contribute to global insecurity, which, in turn, could enhance the chance of a nuclear weapon being used, could create more fertile breeding grounds for terrorism, including nuclear terrorism, and could feed the ambitions among some states to acquire nuclear arms. Furthermore, as evidenced by a series of incidents in recent years, extreme weather events, environmental degradation and major seismic events can directly impact the safety and security of nuclear installations. Moreover, a nuclear war could lead to a rapid and prolonged drop in average global temperatures and significantly disrupt the global climate for years to come, which would have disastrous implications for agriculture, threatening the food supply for most of the world (see Figure 1). Finally, climate change, nuclear weapons and nuclear energy pose threats of intergenerational harm, as evidenced by the transgenerational effects of nuclear testing and nuclear power accidents and the lasting impacts on the climate, environment and public health from carbon emissions.

The need for global action

Negotiations and initiatives for tackling the climate and nuclear threat are reaching a critical stage. At the UN Climate Change Conference in Paris in December 2015 (COP 21), the global community reached an unprecedented agreement on climate change. The Paris Agreement sets out a global action plan to peak greenhouse gas emissions as soon as possible and avoid dangerous climate change by limiting global warming to well below 2°C with the aim to limit the increase to 1.5°C, since this would significantly reduce the risks and impacts of climate change. However, there is some concern about whether this agreement can be enforced effectively. Countries are required to communicate Intended Nationally Determined Contributions (INDCs) to mitigation of and adaptation to climate change which will be regularly reviewed. However, meeting the goals set in the INDCs is not legally required.

Meanwhile, calls from a majority of states for a legally binding instrument or package of measures to achieve the universal prohibition and elimination of nuclear weapons—a goal as old as the nuclear age—have languished. Despite a recent series of interventions setting out the vision of a world free of nuclear weapons by high-level statesmen—including from the nuclear armed-states—concrete action toward its achievement has lagged, although this has the possibility to change with a new process for nuclear disarmament deliberations and negotiations currently taking place at the United Nations in Geneva.

This lack of progress on nuclear disarmament has been starkly contrasted by a renewed focus on the catastrophic consequences of nuclear weapons and recent revelations on the kaleidoscope of risks inherent to nuclear policies and postures. The sobering conclusions are that: a) as long as nuclear weapons exist, their use, whether accidental or intentional, will be a matter of when, not if; b) any use of nuclear weapons in a populated area would have catastrophic consequences on human health, the environment, infrastructure and political stability; and c) the use of just a small percentage of the global nuclear arsenal would create climatic consequences that dwarf the current and projected impact of carbon emissions.

The availability of solutions

Overall, the discrepancy between long-term goals and concrete steps undermines the conditions for international cooperation in security and climate policies. Despite growing awareness of the urgency of tackling the climate and nuclear threat among policy-makers, academics and civil society, concrete action is lagging behind.

Why is this so, when considering that renewable energy technologies provide viable alternatives? (see Figure 2) By harnessing local renewable energy sources, jurisdictions increase their political and energy independency, while the degree of local and international cooperation needed to transition to 100% Renewable Energy can act as a catalyst for cooperation in tackling other transnational security threats. This helps solving geopolitical crises, avoid future armed conflicts triggered by climate instability and resource scarcity, and build cooperative security mechanisms. Similarly, regional initiatives could attempt to tackle both climatic and security threats. For example, Nuclear Weapon-Free Zones (which already cover the entire Southern Hemisphere – see Figure 3) can, in turn, promote regional environmental and climate protection policies, as exemplified by the Antarctic Treaty System. Such action could also be sought in the Arctic, where the effects of climate change and the dangers of nuclear weapons come together as increased competition over resources and the opening up of routes for military maneuvering and posturing, including with nuclear weapons, can heighten tensions between the region’s powers.

Finally, there exist international legal obligations both with regard to curbing climate change and achieving universal nuclear disarmament. It is thus not surprising that on both fronts, litigation has been pursued to ensure these obligations are implemented. Climate cases have been filed in several countries, including in the Netherlands, where the Court ruled in favour of the plaintiffs, noting that the State has a legal obligation to protect its citizens, ordering the Dutch government to reduce its CO2 emissions by a minimum of 25% (compared to 1990) by 2020.

On the nuclear front, the Republic of the Marshall Islands filed applications in 2014 in the International Court of Justice against the nine nuclear-armed states (US, UK, France, Russia, China, India, Pakistan, Israel, North Korea), claiming that they are in breach of obligations relating to nuclear disarmament under the NPT and under customary international law. Cases are proceeding in March 2016 against the three of the nuclear-armed states that have accepted the compulsory jurisdiction of the ICJ—the UK, India, and Pakistan.

For the people of the Marshall Islands, and a rising number of people in other parts of the world, the effects of these two threats are not a theoretical, future issue of concern. Behind the facts and figures are stories of real suffering from climate change and nuclear weapons programmes.

The plight of one group in particular is illustrative of the human impact of the nuclear enterprise and climate change. The inhabitants of the remote Pacific island chain of Bikini Atoll were forced from their homes in the 1940s so that the United States could test its atomic bombs there, bringing with it a legacy of transgenerational effects of radiation exposure, including high cancer rates, birth deformities and environmental poisoning. The lands they had called home were declared uninhabitable. Now, the tiny patches of earth they were relocated to in the Marshall Islands are at risk of suffering the same fate, as rising sea levels are breaching sea walls, washing over their islands, killing crops and forcing the Bikini Atoll refugees to consider relocating again – this time to foreign continents thousands of miles away. As if to underline the potentially catastrophic convergence of both perils, there is even the danger that rising sea levels could spill the radioactive waste from testing, which has been stored on the islands, into the ocean. Their experience should serve as a cautionary tale. If we don’t seize the opportunities soon to rid the world of these threats, we will drift toward a similar fate.

Please note that the report was updated in April 2016 to reflect the outcome of the 2015 Paris Climate Change Conference as well as include developments on the front of climate change litigation efforts.

This article was originally published in the World Commerce Review.

Recognising and Implementing the Rights of Future Generations – Opportunities...
Scroll to top