Last Friday, 48 countries committed to “strive to meet 100% domestic renewable energy production as rapidly as possible while working to end energy poverty, protect water and food security, taking into consideration national circumstances”. These 48 countries are among the most vulnerable countries and are united as the Climate Vulnerable Forum (CVF). With their declaration, these countries prove unique leadership at the end of COP22, keeping up to their promise to take action. This is probably the most important outcome of the Climate Conference in Marrakesh.

Morocco, the host country of COP22, is one of them. Over the past months and years, the World Future Council has worked with several stakeholders in the country, developing a policy roadmap to transition to 100% Renewable Energy. With last week´s declaration, this roadmap can now serve as a guidance for the new government to go faster and further and walk the talk.

A quick look back

These targets are anchored in a three-pronged strategy developed by the government to liberalise and boost the renewable energy sector in Morocco: 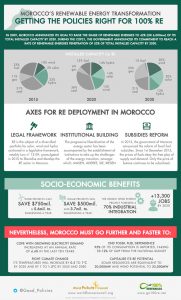 The remodelling of the legal, institutional and financial framework has noticeably helped achieved impressive results in the diversified portfolio of renewable energy projects taking place in Morocco. A well-known example is Noor Ouarzazate, the first solar mega-project launched by the Moroccan solar energy agency (MASEN), will reach a total capacity of 580MW by 2018 and will bring power to 1.1 million people (learn more about it here). Or the Tarfaya’s wind park, with a production potential of 1,084GWh/year, is already supplying 1.5 million households and has become Africa’s largest wind energy project. The park has contributed to the creation of new road installations and equipment, and it has become a source of additional income for local communities by means of the business tax, apart from the development of local skills and capacities relating to wind energy.

Indeed, in Morocco renewable energy is not only a very important factor for the environment and the production of goods and services, but a key development vector as the following figures show:

And a closer look to Morocco’s wind and solar projects’ prices highlights the attractiveness of the country’s renewable energy plan. For instance, the country secured bid of Dh 0.72 (US$0.07 cents/Kwh) for the Tarfaya project and in 2016 set a new low for the Integrated Wind Project, securing a price of Dh 0.31 (US$ 0.03 cents/Kwh). This is well below the fuel fossils import price of 0.97 Dh (US$ 0.09 / Kwh) paid during the last ten years. Even for solar projects the price was also much lower than expected by MASEN, at Dh 1,5 (US$ 0.15 cents/KWh) for the first phase of the projects (NoorO I) and at Dh 1.4 (US$ 0.14 / KWh) for NoorO II and NoorO III.

If Morocco wants to solve the following challenges, it needs to go beyond current efforts:

Because despite the avant-garde energy policy, a number of challenges remain in the way for unleashing Morocco’s incredible renewable energy potential. During round tables and interactive dialogues facilitated by the World Future Council, Moroccan policy-makers, experts and practitioners have identified numerous actions to set Morocco on a path to 100% Renewable Energy, foremost to prioritise renewable sources in the energy system and enable new actors to enter the market – both from a legislative as well as from a capacity perspective. This can only be achieved with a comprehensive approach (see infographic above).

The World Future Council congratulates Morocco for its leadership during COP22 and is committed to support the country in walking the talk.

To learn more about Morocco’s energy situation and potential pathways as well as to explore the proposed actions, read the following report: 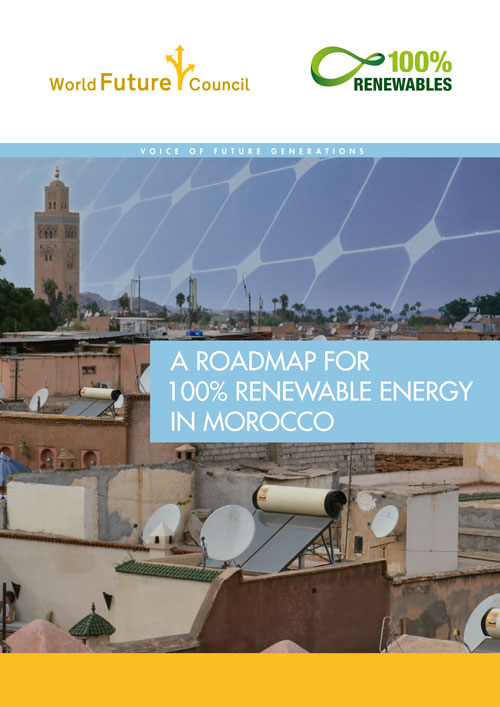 Morocco, COP22 host country, has since 2009 prioritised renewable energies and energy efficiency. Aware of the nature of the opportunities and stakes confronting its energy landscape, the nation has mobilised to share the message about the urgency and advisability of changing the pathway.

In order to address the complexity, challenges and opportunities of the energy challenge, the World Future Council organised a process of reflection for Moroccan actors playing a leading role in this transition: parliamentarians, political actors, academics and civil society. The round tables and conversations we organised between 2014 and 2016 are reflected in this report. We also highlight solutions for putting into place a coherent political framework which allows the materialisation of a 100% renewable energy Morocco.

COP13: Costa Rica and the Benefits of Prosperity Sharing
Scroll to top