The City We Need is Regenerative and Resilient. This is one of the 10 principles of the The City We Need 2.0 as recently proposed by the World Urban Campaign partners. In order to further explore the relevance and importance of this concept towards Habitat III and the New Urban Agenda, the World Future Council, as lead partner of the WUC, will be hosting an official side event at the Habitat III Europe Regional Meeting in Prague. The side event will consist of a panel discussion presenting the fundamental paradigm shifts needed to achieve the Regenerative City vision and discuss the key policy recommendations that should be included in the New Urban Agenda to ensure this vital concept becomes a top policy priority of countries around the world.

What is the Regenerative City?

A new type of urban development powered by renewable energy, driven by a circular economy and defined by a restorative and mutually beneficial relationship between cities and their hinterland is urgently needed. Cities must go beyond sustainability to become truly regenerative: not only being resource-efficient and low carbon, but positively enhancing rather than undermining the ecosystems on which they depend. Regenerative cities mimic nature’s circular metabolism by operating in a closed-loop system that transforms waste outputs into inputs of value. This will mean creating cities that not only deplete resources and damage ecosystems but that actively contribute to the regeneration of the natural resources they consume and the ecosystem services they rely on. 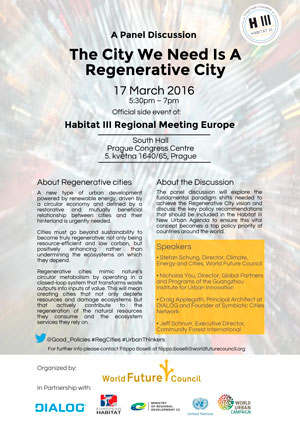 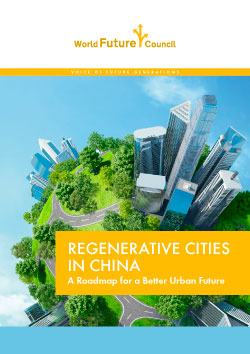 A new type of urbanization is needed. One that reflects a different type of development, also known as the New Normal which is currently gaining widespread support throughout China.

Working together to end violations of human rights of present and future generations...