“If we do not change course, we are heading towards unprecedented dangers and conflicts or even – in the foreseeable future – the end of life on earth.”, says Jakob von Uexkull, founder of the World Future Council.  Phrased as drastically as this, the WFC assessed the current situation in its “Bregenz Declaration”. Renowned Councillors from all around the world discussed their working programme for 2017/18 during the summit at the Festpielhaus Bregenz, Austria. 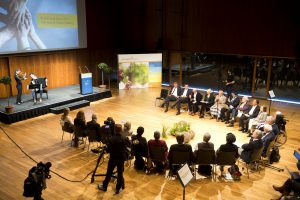 The Councillors are convinced: functional political solutions do exist already – they only have to be spread and realized. This is the reason why the World Future Council identifies laws and measures to safeguard the interests of future generations, for a sustainable, just and peaceful world. The “Bregenz Declaration” summarises the work priorities of the coming year, such as: disarmament, renewable energies, rights of children and food security. The common goal is to find the best policy solutions and to convey them to political decision-makers worldwide.

Jakob von Uexkull is looking back at a productive and successful World Future Forum 2017: “Why live with problems we can solve? We at the World Future Council will keep working for a sustainable, peaceful and just future.”

Each year, the World Future Council identifies and champions best policies with the “Future Policy Award”, as an “Oscar for best laws and policies”. This year, the award honors policies that effectively combat desertification and land degradation: Drylands cover over 30% of the Earth’s land and are extremely vulnerable to over-exploitation and climate variability, which is why more than 135 million people are at risk of being displaced by desertification – one of the reasons for refugee movements. The award ceremony will take place at the upcoming Conference of the Parties of the Convention in China in autumn 2017.

Other actions include advising decision-makers on how best to reform the central bank’s money creation policies to help fund the implementation of the Paris Climate agreement and the Sustainable Development Goals; and to spread measures that prohibit and eliminate nuclear weapons as well as ban their financing.

You will find the full Bregenz Declaration here or by clicking on the button below.

A Conversation with Kehkashan Basu and Pauline Tangiora

Unlocking the trillions to finance the 1.5°C limit

SHAPING THE FUTURE FOR 100% RENEWABLE ENERGY Scroll to top